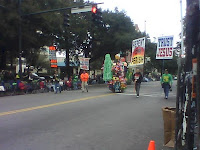 Every year, Savannah has its Saint Patrick's Day parade. It's a very large one, one of the biggest in the country - second only to Boston. Huge crowds gather, and there are many familiar sights: the bagpipes, the old men dressed as leprechauns, the vendors, and...the street preachers. Every year, men with large signs and bullhorns move through the pre-parade streets, bellowing to the audience. Their signs are adorned either with messages that look like something from Westboro Baptist Church or images of people going to hell for various sins. With their speakers they denounce drinking, fornication, homosexuality, and all manners of public sin, telling the audience they're going to hell. If television crews are nearby (and especially during a live-shot) this group will walk behind the anchors, their signs in view and their speakers blaring their theology loud enough to go over the person speaking. My usual reaction to all this is to put my hat over my head and pray they go by quickly, followed by some damage control by telling people nearby that this isn't real Christianity. Such display is really a disgusting disservice to Christ.

Now so no one misunderstands me, let me make it clear I am not implying disapproval of all forms of public proselytizing. There are many people who simply pass out tracts (there were some at the parade, and they were fine). There are other people who set up tables or engage in one-on-one witnessing inside the crowd. Public proselytizing can be a great thing, and I've heard of people being saved by these methods. Going out in public and attempting to save strangers is by itself not bad, and we certainly find examples of great Christian men throughout history doing it.

What is not edifying are these public, in-your-face tactics that amount to a group saying "Look at me! Look at me!" while pronouncing judgment on all present. Paul debated the pagan philosophers in the Areopagus, but he didn't go through the streets of Athens screaming and telling everyone they were going to hell. Martin Luther nailed the 95 theses to the door of the castle church for all to see, but he didn't print each theses on a large sign and have 95 people walk through the streets screaming them out. John Wesley preached openly to large crowds and even talked about damnation and sin, however he did so in an organized fashion and often with the permission of whomever owned the land. They never had to resort to this...and they were all far more successful.

To see such a flagrant disregard for presentation and method, the words of the apostle Paul to the hypocritical Jewish Christians come to mind: "the name of God is blasphemed among the Gentiles because of you" (Rom 2:24). The unbelieving people who simply don't know any better probably look at this and say, "Well that must be Christianity, and if that's Christianity, then I want no part of it." While this is not an implication that Christians have to be "seeker friendly," we should avoid orchestrating stereotypes that, again, bring disservice to the cause of Christ.

When I feel Muslims who put on a show, talk big to Christians, and blatantly lie and distort truth and do not seem bothered by it because their only goal is to preach to the Muslim choir, I feel bad for the more calm-minded Muslims out there. When I see things such as this, I feel sorry for the universal church. This can only be what Christ warned about when He spoke against parading your faith before others, and I can't help but think that this has not served the cause of Christ in any great way. When I seek to educate others or be of assistance in another person's understanding, I pray to God that I will be of service to His will and not the evil one. One can only imagine who's will these types of groups are performing.

Below is another example of what I am talking about. The video shows the "Street Screechers," who use similar tactics against Mormons. Lord have mercy.

Email ThisBlogThis!Share to TwitterShare to FacebookShare to Pinterest
Posted by Tony at 9:59 PM