Remembering Soldiers as a Christian

Here in the United Stated we are in the midst of celebrating Memorial Day, where we remember those servicemen and women who gave their lives for their nation. As such, I thought it would be appropriate to bring up a topic that has been in the back of my mind for some time. You see, a while ago I read the blog post of an individual who had much to say in regards to remembering military servicemen and women. Namely, that he would never have respect for someone who joined the military. His reasoning was that Christ told us to love our enemies, not to kill, subjugate, or oppress them.

It is true that we are instructed to love our enemies, and that killing is spoken against throughout the Bible, but I fear that such Christian mentality falls into the problem of many left-wing modernists (especially those who thrived in the face of Vietnam and the recent Iraq War) who forgot that broad brushing a group based on rhetoric forsook the humanity of the individual. I'd like to first review the errors of the thinking we have been presented:

First, it suggests that all soldiers want war. This isn't true. There are some out there who have a "pray for war" mentality, but they are generally in the wrong thinking to begin with. Your average soldier doesn't want to be separated from family, home, and sent to a faraway country for extended periods of time to fight and possibly die. Yet they accept that possibility as duty.

Second, it suggests that all soldiers enjoy war and killing. This also isn't true. Even veterans who believed they did the right thing in serving during war have horror stories to share. Participation in war is not seen by a soldier as fun, but, again, as duty. It is never a constant mindset on anyone except the soldier on campaign, and only then it is because he is on a 24/7 job. For the soldier at home, they are as human as those out of uniform. I recall one time my father and I coming across a soldier heading into base, whose taxi had died on the side of the road. We picked him up and drove him to his destination, talking to him along the way. He was excited to begin training, and all that he was scheduled to do - none of it involved learning to kill, getting to kill, or going to war.

Third, it assumes a soldier's (let alone an army's) direct motive is to kill, subjugate, or oppress the opponent. This is not always true. There are plenty of stories where soldiers, facing a situation in which they had ever right to fire first, chose not to do so. I recall one story of a soldier in Bosnia who, having compassion for a drunken, old Serbian man who had shot at American troops, chose instead of killing him to talking him into giving up his weapon. Furthermore, soldiers are not always sent to fight, but to enforce: a soldier watching over Kosovar schoolchildren will only have to kill if anyone attempts to hurt them.

It might be noted here that those who hold standards to soldiers do not hold the same standards for the police. Police are armed men and women who - at some point in their life, if indeed that time comes - may be forced to kill a human being. Yet one does not see major portions of liberal Christianity denouncing Christian policemen, or saying that a Christian should not respect the position of a law enforcement agent. The only difference between a soldier and a policeman, however, is that a policeman is city-based whereas the soldier may be called by his country to fight on foreign soil. Both, however, are in a position of defense: the policeman defends his brother from the enemy of the law; the soldier defends his brother from the enemy of the state.

Many have opined that when Christianity became accepted by the entire Roman Empire under Emperor Constantine, it complicated things because now any member of society could be a Christian, soldiers included. While it is certainly true that the Church had to deal with new problems, and often came up with humorous solutions (Basil the Great suggested that a soldier who kills in battle abstain from communion for three years), it also forgets that there existed Christian soldiers before Constantine's declaration. There exist many accounts of Christian soldiers (many of them martyrs) in the hagiography of ancient Christianity.

One forgotten Christian soldier is St. George. Although remembered as the dragon-slayer, this fictitious account does not hide the fact that George himself was a historical personality: a Christian soldier who was eventually martyred for his faith. In fact, his faith during martyrdom his faith was so strong and so clear that two people converted to Christ right then and there. 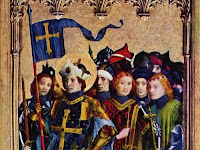 Another forgotten Christian soldier is St. Maurice, the patron saint of the American infantrymen and historical commander of the Theban Legion (all of whom were Christians). While on campaign, the legion was ordered to annihilate a town made up mostly of Christians. Maurice refused. The Roman command, seeking to turn his men against him, told the legion that if they followed with Maurice they would be decimated (every tenth man killed). The soldiers, identifying loyalty to their faithful commander equaling loyalty to their faithful God, refused to turn against him. As a result, the entire legion was martyred.

Yet another forgotten Christian soldier is St. Martin of Tours. Martin was a Roman officer on a winter campaign when his unit came across an old man begging for food and clothing. The other Roman officers, enraged at such "indignation," were about to kill him when Martin intervened. Then, taking his cloak, he divided it in two and gave half to the old man, using the sword, which so many condemn, for good rather than evil. Later that night Martin had a vision of Christ wearing the cloak, and afterward converted to Christianity. When he left military service he joined the church and later became a bishop.

There are many more I could mention, but I quote these few examples to give a taste of believing soldiers who have existed in the days preceding Constantine.

If the reader chooses to refuse any tale from the hagiography, I can certainly turn to modern times and ask: would these men be in the wrong? What of military chaplains who have given their life ministering to soldiers? Are they heretics? Is honoring them an affront to God? We must recognize, if we remember servicemen and women on days such as this, that we are remembering those spiritual leaders within the armed forces as well. Are these men traitors to their Lord?

What immediately comes to mind are the four chaplains who died on the USAT Dorchester in 1943. They were a mixed group for certain (one Catholic priest, one rabbi, and two Protestant ministers), yet they all were true to their faith. As life jackets became scarce, the chaplains gave up their own to soldiers. One chaplain, hearing a soldier say he had to go back to get his gloves, gave him his own so that the soldier's escape would not be delayed. All who survived said that the last thing they saw as the ship went down was the four chaplains huddled together in prayer. Are we to assume these men were wrong for saving the lives of soldiers, for caring for them as they would a civilian flock, and for giving their own lives for those we are to believe do nothing but kill? When Christ said, "Greater love has no one than this, that someone lay down his life for his friends" (John 15:13; ESV), did He mean soldiers were to be left out?

What also of the Catholic chaplain Emil Kapaun, who was captured during the Korean War and spent his entire time ministering to soldiers - Catholic and Protestant - in the POW camp. Was he in error? Did these men simply deserve to die and go to hell? Or were they, in fact, worthy to hear the gospel, as any sinner is. The apostle James wrote, "For whoever keeps the whole law but fails in one point has become accountable for all of it" (Jam 2:10; ESV). Why, then, should we cut off the compassion of God even if men were guilty of breaking the sixth commandment? Who are we to decide who does and does not receive the love of God?

I realize there are many who will never support war. That is not the issue here. However, to lose compassion and respect for soldiers is to grow heartless and legalistic. John Wesley, a great example of Christian compassion, went and visited murderers in prison and gave them the gospel message. If we are to believe soldiers are walking murderers in uniform, why should they not receive the same kind of human grace, which can only be sourced from a heart sincere in the love for God? "But you do not honor the murderer in prison," some might argue here. That is true. Then again, as I outlined in the beginning, the soldier does not have the same mindset of a murderer. To put them both into the same category, as those mentioned at the start of this post do, is erroneous. A killer has no rational mindset - a soldier does.

I realize there many who will not be moved by this, and I can only say that I did not write this for them. I will, however, end with this: there are many liberal Christians who, when the day of judgment comes, will be surprised how many people who wore the uniform will be with our Lord in paradise.
Email ThisBlogThis!Share to TwitterShare to FacebookShare to Pinterest
Posted by Tony at 3:00 PM