I saw the image on the left at an internet forum, used in someone's signature. In case anyone is unclear what it is, it's a "LOLcat" featuring a kitten in a garbage bin with the words, "What Calvinism says God wants [to] do with people" (obviously I've cleaned up the spelling). The immediate implication is that Calvinism says God throws people in the garbage. Whether intended for humor or not, this metaphorical argument is entirely wrong. Let's examine the situation according to what Calvinism really teaches, and keep it within the parameters of the metaphor being used. I'll be using TULIP as the model...

Total Depravity: The cat is in the trash can because he wants to be there. He wants to be compacted with the garbage. He has no desire, intentional or not, to get out of the garbage can. If you were to try and take him out, he would, by his very nature, hiss and claw and scratch at you. He is not there because God has placed him there, but because, through his self-destructive will, he has placed himself there. Indeed, there is nothing which merits the cats being saved from the garbage at all.
Unconditional Election: God takes the cat out of the garbage can. The cat does not leave because he personally wants to, but because God has enabled him. There is no bargaining between the cat and God, nor is there any discussion in which God can lose. When God chooses a cat, He chooses a cat completely, and the cat's salvation from being in the garbage is assured.
Limited Atonement: God knows and reserves a number of cats to be saved from the garbage cans. No one knows this number save for God, but the number itself is not important. Indeed, it is not that it is shocking God has chosen to elect some angry, feisty cats seeking self-destruction, but rather that God has chosen to elect any angry, feisty cats seeking self-destruction. God does not try His hardest and fail 50% of the time, with some cats going into the compacter because of His inability, but rather God knows who to save, and by His will those cats are saved.
Irresistible Grace: The cat will not be hissing and clawing when God takes him out of the garbage. Rather, as stated before, God will enable the cat to desire to get out of the garbage, and when God reaches in to take the cat out of the garbage, the cat will no longer be hissing and scratching. In fact, the cat will be purring and ready to fall asleep on God's lap as soon as he is taken out.
Perseverance of the Saints: All cats taken out of the garbage cans will never find themselves in the garbage again. God will not allow them to jump back in, and though they may have their cat-like moments outside the garbage, it will never be so bad that they will find themselves in the garbage again. They will find themselves getting better and better in a life beyond the garbage, and will find eternity nestled snugly with God. He will not allow any of them to be lost again.

When seen under the context of which Calvinism defines itself, we realize just how large a misrepresentation this image is.

I now present an alternative, courtesy of my cell phone camera, the family cat and my own UBS Greek New Testament... 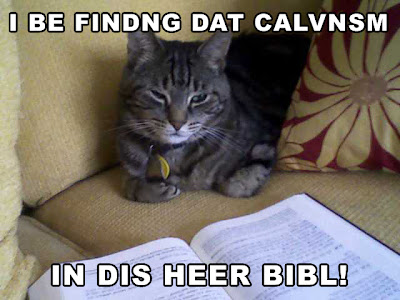 Email ThisBlogThis!Share to TwitterShare to FacebookShare to Pinterest
Posted by Tony at 2:14 PM