This is going to be a very personal post. You see, this is my repentance for the sins I have committed. I wasn't aware of these sins until some time ago when I this Facebook exchange occurred between myself and one Kirk Bookmyer, a hyper-Calvinist who had been holding discussions with my brother in Christ Steven for some time now. Below is an image showing the entire conversation. 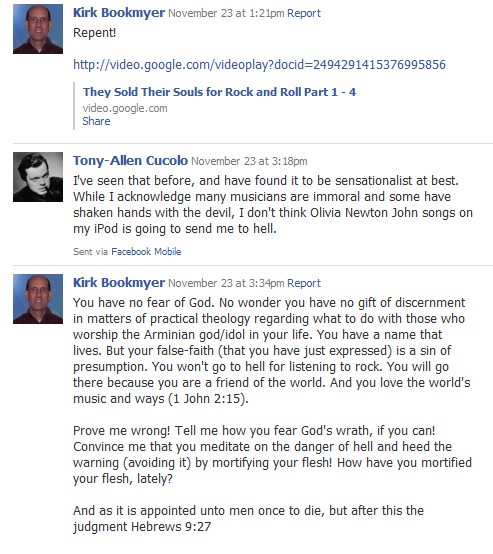 The truth is...I did love the music of the world, and I did embrace evil doctrines that were damning me to hell. Please, permit me to explain, and as you read know that I throw my judgment into the hands of the discerning reader...

In February of 2009, I attended the Olivia Newton John concert being held in Norfolk, VA. I sat in among hundreds of people and, without any shock or horror, watched as Olivia Newton John proceeded to come out and kill babies. She then demanded we all worship a new god, and while singing "Xanadu" raised up altars on high places. Then, as she sang songs from "Grease," men with swords came about the audience and forced everyone present to say "Caesar is Lord."

I realize now that there is only one way a woman like her can look so beautiful at 60-plus-years of age and still be in top physical shape: Olivia Newton John is possessed by demons. Most likely Satan himself. I should have seen the signs before, but alas I was seduced by the nice singing voice and her desire to help causes like preserving the rain forests. Hey wait a minute...rain forests? We all know the rain forests are where demons go to spawn - why didn't I see it sooner?! Praise God for this new revelation, given by the Holy Spirit!

Likewise, I had recently rediscovered my childhood love for 1990's country music, in particular Brooks and Dunn. After this brotherly correction from Kirk, I realized these men were perhaps worse than Hitler and quickly deleted all their songs from my iPod. That these two are really demonic is all too obvious: their initials are B&D...the same as Baal and Dagon! I am certain that Dunn is really Dagon in disguise, trying to get revenge on God's people for the ark smashing up his statue, and that he has asked his good buddy Baal to assist him in this unholy crusade. Despite songs such as "Believe" (about a young boy remembering a faithful old Christian man) or "Brand New Man" (about a promiscuous rascal who falls for a girl and enters a monogamous relationship), I could no longer be fooled. No doubt these songs were just a cover for their evil deeds; also no doubt that Brooks and Dunn read the Necronomicon to their kids at night.

Finally, I must confess the worst sin of all...and please, forgive me for this great, nearly unpardonable sin...

Yes, Ol' Blue Eyes...or should I say Ol' Satan? With guidance from the Holy Spirit, I see his songs in a brand new light. Indeed, they're now so disgusting, I wondered why I hadn't seen the warning signs before. Metaphors in the lyrics displayed an obviously demonic and worldly agenda. One example is "touched your hair" in the crooner song "Summer Wind" (Disgusting! Touching a girl's hair?! That's pornographic!). Most of all, however, the song "Witchcraft" was a blatant attempt to promote New Age movements in America, and it seems to have done its work. Yes, I know that some will respond to that by saying, "But he's using witchcraft as a metaphor for what love for a woman can do to a man," but you're simply lost and doomed to hell. The lyrics are clear! Frank Sinatra was a messenger of Satan, and his songs were evil, vile, no good doctrines of death!

There are other examples I could give. For example, on my iPod is the Lynyrd Skynyrd song "Devil in the Bottle." I mean just listen to the title! Devil in a bottle?! Anything with "devil" in it has to be demonic right off the bat. Never mind the fact that the devil of the title is alcoholism, and that it ultimately ends with the singer overcoming it - the fact is it has the word "devil" in it, and so it's pure evil! And so must be Lynyrd Skynyrd! I mean c'mon, "Sweet Home Alabama"? Alabama is the devil's country. That's where devils go for their honeymoon after they spawn in the rain forests. I wouldn't be surprised if Olivia Newton John and Lynyrd Skynyrd had some evil agenda going on while the latter were still alive.

Perhaps the greatest sin is I have an Arminian song on my iPod. It's a remix of a song from an old Soviet cartoon, and...oh no wait, I'm sorry, it's an Armenian song. Well...still! That's too close to Arminian! Once you change that "I" to an "E," that's enough to let Satan just sneak in through the door! Then I'll be bowing to a crucifix with Jacob Arminius instead of Christ and praying to Saint John Wesley for guidance. I bet if I played the song backwards it says either "Man has a libertarian free will" or "Paul is dead" (the Beatle, not the apostle).

So, to all my readers, I ask for sincere forgiveness for all of this. Know that I am now cradling myself up into a little box and sucking my thumb while hoping the world out there doesn't get me. Thank you, and God bless.
Email ThisBlogThis!Share to TwitterShare to FacebookShare to Pinterest
Posted by Tony at 2:42 PM