Perhaps some of the main differences between universalism (everyone goes to heaven), inclusivism (some non-Christians will go to heaven) and exclusivism (salvation in Christ alone) rests both in the place of God's Law and Christ's Righteousness.

I created a diagram to explain this further: 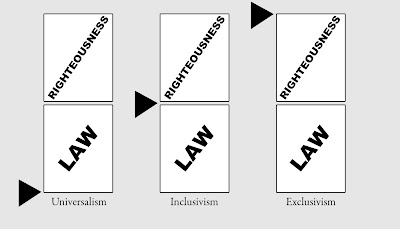 Universalism excludes both God's Law and Christ's righteousness. Some universalists might argue that Christ's righteousness covers mankind in toto and for this reason all go to heaven, but this contradicts the teaching of scripture that eternal life is dependent upon belief in Christ (John 3:16). Some universalists will likewise propose some level of God's Law - or at least some social standard for individuals to follow. The problem with this is two-fold: 1) it is no longer a standard of righteousness, but rather a therapeutic moral code of ethics; 2) the idea of a consequence-free afterlife makes any reason for morals in this life absolutely senseless. That is, why avoid being a Heinrich Himmler and shoot for being an Oscar Schindler if both Schindler and Himmler will, in the end, both be in heaven?

Inclusivism might include God's Law, but does not depend on Christ's righteousness. It recognizes that God has a standard and a set rule of morality and ethics, but that nothing else is needed of others to obtain salvation. If a person is "good," then it is possible for them to be considered saved and enter into heaven upon death. Therefore, whereas inclusivists may follow through the works of the Law, they will stop short at the righteousness of Christ. However, this seems to forget that "by the works of the Law no flesh will be justified in His sight" (Rom 3:20), and that all our good deeds "are like a filthy garment" (Isa 64:6). The point of the Law is to "shut up everyone under sin," so that none may consider themselves righteous before God, and "so that the promise by faith in Jesus Christ might be given to those who believe" (Gal 3:22). As "all have sinned and fall short of the glory of God" (Rom 3:23), there is none on earth who is without need of Christ's righteousness. Some inclusivists might argue that God may choose to bestow His righteousness upon unbelievers by His own mercy, but this thinking suffers in a few points:

1) No where in scripture does it say God has any obligation to save anyone outside of faith. Bringing unrepentant sinners into a state of repentance is enough of a sign of His mercy.

2) This ignores the constant teaching of scripture, which states that it is in faith by which we receive our righteousness. Those outside of faith are condemned already because they are outside of faith and still live in their sins (cf. John 3:18), and it is only "those who are in Christ Jesus" who are no longer under condemnation (Rom 8:1). Righteousness is given through faith, and the righteousness of Christ is solely conditional upon faith.

Exclusivism includes both God's Law and Christ's righteousness. We are saved by Christ alone for the glory of God alone. This salvation is based upon the imputed righteousness of Christ. This is that righteousness "apart from the Law," which is only "through faith in Jesus Christ for all those who believe" (Rom 3:21-22). Christ told His followers:


I am the vine, you are the branches; he who abides in Me and I in him, he bears much fruit, for apart from Me you can do nothing. If anyone does not abide in Me, he is thrown away as a branch and dries up; and they gather them, and cast them into the fire and they are burned. [John 15:5-6]

Man left on his own is helpless without God. No one will be in hell simply because they did not meet a set of beliefs - but rather, they will be in hell for their sins. However, with Christ, the sacrifice for our sins and the only righteous man to ever live, we are able to stand before the Father and be considered sons in adoption.

Of course the world, as a whole, does not care for exclusivism, as the very name sounds like something with prejudice or bias. The world at large wants us to believe in universalism, whereas most liberal Christians think only someone with a closed mind would reject inclusivism. Nonetheless, exclusivism is simply another word for the biblical teachings of salvation. Many times in Acts and the epistles, salvation is always conditional upon the words "in Christ." Always, always "in Christ." There is no other way to describe the focal point of salvation except "in Christ."
Email ThisBlogThis!Share to TwitterShare to FacebookShare to Pinterest
Posted by Tony at 11:00 AM