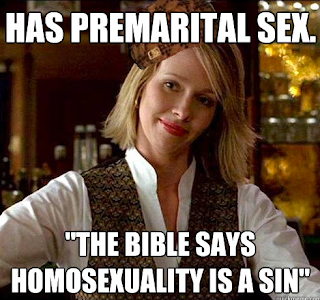 I came across this meme a few weeks ago, and - after some interaction with certain people - asked a coworker to find it for me again, as it was quickly inspiring a blog post. The meme is called something like "hypocritical Christian girl" and is popular around some online atheist circles. Despite the source material, God always has a way of making truth come out of error, and I believe there's a lot to be said from this one image.

Throughout my life, I've encountered people who held what one might call "cafeteria morality" - in other words, they would pick and choose that part of God's moral law to follow. In my atheist days, I knew a girl who would lament my unbelief, then a few minutes later talk about the physical relations she had with her boyfriend the night before. I've known people who were on the level when it came to the teachings of God's word regarding homosexuality, abortion, the definition of marriage, etc., and yet would engage in sex with other people and even have premarital sex with their future spouse.

Of course, whenever anyone begins to talk of morality, straw men and emotional arguments fly, and so I must take a moment here to dispel any possible attacks against my person rather than my position. If you are like the people I described in the previous paragraph, then know that I am not saying I am any better than you as an individual. I am also not saying I am any more justified before God because you do x and I don't do x. At the time of this writing I am unmarried and a virgin, and intend to keep my virginity until marriage. However, I have done things in the past for which I am not proud, and still struggle in certain ways that would warrant judgment. I have always agreed with the words of the apostle James that being guilty of any transgression against God's commands made you are guilty of transgressing them all (Jam 2:10). Therefore, I am not writing this post in the spirit of "I'm better than you," but rather as a call for discernment and biblical dialogue about an important matter.

We must, first and foremost, recognize that the biblical teaching regarding sexual relations is that it always exists within the confines of marriage. When Adam and Eve first met, it was written in a kind of "divine commentary" that "a man shall leave his father and his mother and hold fast to his wife, and they shall become one flesh" (Gen 2:24). This was something Christ later affirmed, saying "they are no longer two but one flesh" (Matt 19:4-6).

The apostle Paul wrote on this explicitly in his first letter to the Corinthians, continually drawing allusion to the concept of "becoming one flesh." Interestingly, he begins with the theology of Christ being the husband of the church, saying we are essentially of one flesh with him (cf. 1 Cor 6:13). He states that our bodies are "members of Christ," and so we should never do anything as bad as go to a prostitute for her services, for we are in essence "becoming one flesh" with her (1 Cor 6:14-15). We are therefore commanded to flee sexual immorality, as it is a sin against our body, which is the temple of the Holy Spirit dwelling within us (1 Cor 6:18-19). To commit a sin of the flesh is to transgress against God.

With the same flow of thought, Paul moves into a discussion regarding relationships within marriage. As the apostle recognized that sexual immorality would be a greater temptation to some, he encouraged marriage (1 Cor 7:2), adding later that "it is better to marry than to burn with passion" (1 Cor 7:9). However, this was not a case of the woman being a submissive outlet for the man's lusts - rather, this is a continuation of the "one flesh" mindset. I say this because Paul gives very clear language regarding man and woman completing one another physically: 1) the husband gives his wife her "conjugal rights," as does the wife to her husband (1 Cor 7:3); 2) the husband has rights over the wife's body, but the wife also has rights over the husband's body (1 Cor 7:4); 3) the husband and wife are not to deny their physical bonds except upon mutual agreement, and for moments of prayer and meditation, but even then they are meant to eventually unite together again (1 Cor 7:5). This is beautiful (and incredibly tasteful) imagery of what "one flesh" means: the wonderful bond between man and woman in marriage, submitting to one another as equals in physical intimacy. Husband and wife fulfill one another, and in this manner they truly become "one flesh." However, we must reiterate that such a beautiful bond is only possible within marriage.

Scripture has less kinder things to say about sexual relations outside of marriage. It is said many times that the sexually immoral have no inheritance in the kingdom of God (1 Cor 6:9-10; Eph 5:5; Rev 21:8, 22:15). The apostle Paul even advised Christians not to associate with so-called "brothers" if they were guilty of sexual immorality (1 Cor 5:11). He also said that sexual immorality was one of the works of the flesh, which are opposed to the desires of the spirit (Gal 5:17-21). Let's also not forget that Christ identified looking with lust at someone to whom you were not married made you guilty of adultery (Matt 5:27-28) - if the mere thinking of non-marital relations makes you guilty, how much more does the very act!

Many, of course, will ignore all these relevant passages, as well as the clear teaching of the entirety of scripture. They will then do one of two things:

1) Jump to irrelevant passages. Many will find any way they can to abuse the word of God to justify what they do - some of them outright bizarre. In one Christian forum, I read a post where a man actually used Genesis 9:7 as justification to look at pornography! Some jump to the imperfect lifestyles of men like Samson, forgetting that such men eventually received judgment for their actions. Some jump to the strong physical language of the Song of Solomon, seemingly forgetting that the dialogue is between husband and wife. Some say that prostitutes were allowed to spend time with Christ, not seeming to realize that these were repentant prostitutes who weren't continuing their trade. If a person wishes to argue the morality of sex, they will have to do so by going to the passages that actually speak on the morality of sex.

2) Present philosophical arguments. When the word of God is clearly against you, people turn to the thoughts of man, which are by their very nature corrupt (Gen 6:5; Jer 17:9). They try to calculate and philosophize why sex outside of marriage would be all right, even within a religious context. One girl I was speaking to told me how she thought of buying her boyfriend's favorite yogurt while at the grocery store, and from this one experience she held the firm belief that God was all right with premarital sex. Perhaps my favorite argument used is "Surely God's OK with it if you love each other?" Paul gave us a fitting warning when, right after identifying sexual immorality as evil, he wrote: "Let no one deceive you with empty words, for because of these things the wrath of God comes upon the sons of disobedience" (Eph 5:6).

Knowing, then, that the scriptural teaching regarding sexual relations is that it is meant for marriage, and sexual relations outside of marriage is immoral, Christians are compelled to at least acknowledge this reality. To not do so is not only moral hypocrisy, but playing games with the moral law of God - something very severe before the eyes of the Lord. "Whoever relaxes one of the least of these commandments," Christ said, "and teaches others to do the same will be called least in the kingdom of heaven" (Matt 5:19). We cannot pick and choose morality because it is simply not our place. When God says, "Don't do x, y and z," we don't get to say "Well I choose to do x and y while condemning z" because it is simply not our place.

For many, the issue is that they are quick to condemn homosexuality as a sin while they forget that homosexuality is but a part of the larger umbrella of all sexual immorality. Heterosexual sins make one just as guilty before a holy God as homosexuality. I would propose that a true Christian who struggles with homosexual desires is far more righteous before God than a supposed Christian who unrepentantly cheats on his wife in a heterosexual relationship. The former knows his sin is ever before him (Psa 51:3); the latter is blind to his own error, condemning the one brother for the speck in his eye while ignoring the plank in his own (Matt 7:4-5).

It was to such people that Paul wrote the second chapter of the letter to the Roman church. After detailing the depravity of the Gentile world, Paul turned towards the Jews and said "in passing judgment on another you condemn yourself, because you, the judge, practice the very same things" (Rom 2:1). He likewise wrote: "Do you suppose, O man—you who judge those who practice such things and yet do them yourself—that you will escape the judgment of God?" (Rom 2:3) These are words many supposed Christians should be asking themselves, for in condemning homosexuals and abortion doctors while justifying their own personal sexual immorality, they merely heap judgment upon themselves.

Many reading this post may be such people who claim to be Christian and yet engage in premarital sex or sexual immorality. If this is the case, you must now be aware that what you are doing is wrong in the eyes of God, and that if you are to stand against one brand of sexual immorality, you must likewise condemn your own sexual immorality and repent of it. The good news is that while you still have breath and while you still have voice, you still have the ability, by the grace of God, to repent. Know that Christ is a far, far greater Savior than you could ever be a sinner. God bless.
Email ThisBlogThis!Share to TwitterShare to FacebookShare to Pinterest
Posted by Tony at 10:00 AM