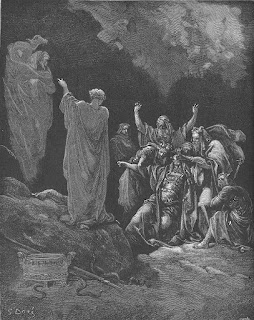 So a certain someone who shall remain nameless has been continually asking me about 1 Samuel 28, specifically the episode between Saul, the witch of Endor (no relation to Ewoks), and the spirit of Samuel. Many questions come from this episode. Does this mean it's OK to seek the counsel of mediums? Does this mean God permits us to use zodiac readings, spiritualism, and other means to get answers? Even more importantly, what about the spirit that appeared before Saul and the witch? Was it Samuel? Or was it a demon disguised as Samuel? Let's answer this question by going through the story verse by verse.

The beginning of 1 Samuel 28 finds the Philistines preparing for war against the Israelites. Things are not looking good for Israel, and especially for their king Saul: Samuel, their prized prophet, is dead (v. 3); David, who is seen as invincible, had escaped to the Philistines for safety and was now in their army (v. 1-2); Saul, Israel's king, is seen as weak and on the verge of insanity. Now the Philistines (seeing all these wonderful factors working together) have gathered a massive army and are preparing to invade. Saul prepares his own army and camps at Gilboa (v. 4), which, when reviewing the region's geography, gives Saul a wonderful view of the massive army facing him. His reaction upon facing the enemy is distraught (v. 5).

It is then said that Saul "inquired of the LORD," the LORD does not answer, whether it be "by dreams, or by Urim, or by prophets" (v. 6). These three words signify how much Saul has fallen at this point:
Feeling at wits end, Saul seeks a desperate means of an answer: a medium (v. 7). The word often translated as "medium" in the Old Testament actually refers to a kind of ritual pit which spiritualists used to supposedly summon underworld spirits to answer their questions. When it's used in situations such as in verse 7, it refers to the owner of the pit. Many of them had what is called a "familiar spirit," which would assist them by impersonating whoever it was the person desired to see. Spiritual impersonation is not entirely unheard of - those proficient in the Ouija board warn people that the spirit they are conversing with may or may not be who they think it is. Scripture never denies a spiritual world; it simply denies any good in the spiritual world that is not God's domain.

It had earlier been established that Saul had banished the mediums and necromancers (v. 3), yet now he not only seeks one out (showing his great spiritual hypocrisy), but his own staff are able to direct him towards one at Endor (showing the corruption in his command). Saul, along with two men, leaves camp in disguise and asks the woman to conjure up a spirit of his choice (v. 8). The witch fears this is entrapment (v. 9), but Saul swears by the name of the LORD that no harm will come to her (v. 10). Specifically, he desires her to raise Samuel (v. 11).

Let's pause here a moment. By verse 11, Saul is already guilty of numerous crimes:
All in all, what Saul is doing here is hardly an example for us to follow.

The narrative then skips to after the woman has performed her craft, and upon seeing a spirit that appears to be Samuel, it is said she "cried out with a loud voice" (v. 12). Previously, I had presumed she "cried out" because of the sight of Samuel, as if to say, "Holy moly! I actually really did conjure up something!", since she most likely lied about previous incantations. Many commentators have taken to a similar understanding. However, upon a closer review, I believe it has more so to do with Saul's identity. It says in the same verse that, after crying out, she turns and correctly identifies Saul for who he is, probably recognizing who this Samuel was, and realizing that only Saul would seek for this specific Samuel. Saul's first reaction is to say "Do not be afraid" (v. 13), showing that her fear was still that Saul had entrapped her. Her "crying out," then, was owed more to her fear of Saul than of Samuel.

Sauls asks what she sees, and she replies, "I see a god coming up out of the earth" (v. 13). This is heathen language: she refers to spirits, whom her people assumed were gods (in fact, the original Hebrew is the familiar plural of Elohim). She then describes this spirit as an old man wrapped in a robe (as Samuel often wore; 1 Sam 15:27), which Saul then assumes to be Samuel (v. 14), and so prostrates before him.

Let us pause here again: would Samuel have been able to have been resurrected in any way, shape or form? We know that necromancers and mediums have no real power over the dead, therefore the witch could not have raised Samuel of her own power. It is entirely possible that God permitted it to work, as a way to make judgment known to Saul. That is certainly how some people interpret this episode to be, and it probably wouldn't be entirely false to come to that conclusion. At this point, many would probably assume that this entity was the real Samuel.

However, Samuel's first reaction seems peculiar to a prophet of God. Instead of rebuking Saul for consulting a necromancer and so transgressing the Law, he simply says, "Why have you disturbed me by bringing me up?" (v. 15) Not only does Samuel fail to rebuke Saul for his grievous sin, but he confesses a belief in the powers necromancers have by affirming (even if indirectly) that he was indeed raised up by the power of a medium. If God had been the force behind it, why would Samuel, a prophet of God, had given the credit to Saul and the medium? One might argue that Saul and the witch were merely the catalyst for Samuel's brief spiritual resurrection, but that does not change the danger in Samuel's words.

An interesting objection brought up by John Calvin regards the description of Samuel wearing a robe. Namely, Calvin asks, "Are we to believe that Samuel took his cloak with him into the grave?" Most often when the dead are discussed, it is said that they are provided clothes by God (for example, the white robes described in Revelation). Lazarus, when he was raised, was still wearing the burial garments he had been wrapped in, not his favorite outfit. Are we supposed to assume that Abraham Lincoln is in heaven with his famous top hat, or Dietrich Bonhoeffer is in heaven with his eyeglasses? The inclusion of Samuel wearing robes suggests an attempt to give a sign it was Samuel, again hinting at the possibility of spiritual impersonation.

Many people have also pointed to the vague language used in the following verses. That is, nothing said is something that could not yet be discerned or conjectured by anyone else. Samuel states that God had turned against Saul and become his enemy (v. 16), something anyone could have guessed from verse 6. Samuel states that God has given Israel from Saul to David (v. 17), something Samuel had already said (1 Sam 15:28). Samuel states that God is punishing Saul for not carrying out His judgment against Amalek (v. 18), which was certainly one of Saul's biggest sins, but was not his only one. In fact, the nail in the coffin for Saul was the very act of going to the witch of Endor, something scripture clarifies elsewhere (1 Chr 10:13), and yet Samuel here makes no mention of, either in rebuke or in judgment.

The final part of Samuel's words to Saul is in regards to the coming battle (v. 19), which many believe to be a detailed, assured prophecy that proves it was really Samuel. However, all Samuel says is that Saul and his sons will die, and the Philistines will defeat Israel (which comes true; 1 Sam 31:6). That the Philistines will defeat Israel anyone could have guessed - the Israelites were greatly outnumbered, led by an inept king, and most of their best men had defected outside the country. It would be no different than predicting that a football team with an inept coach, and whose quarterback now works for the opposite team, is going to lose their upcoming game.

Samuel's vague prediction of "you and your sons will be with me" is also hardly detailed. Compare it to Elijah's prophecies for the deaths of Ahab and Jezebel: he predicted regarding Ahab that "where dogs licked up the blood of Naboth shall dogs lick your own blood" (1 Ki 21:19), and regarding Jezebel he said "the dogs shall eat Jezebel within the walls of Jezreel" (1 Ki 21:23). Both of these are graphic, detailed predictions that indeed come true just as they are described. Predicting, however, that men in high commands or front-line positions are going to die in an upcoming battle you already know is going to go miserably and probably end in high casualties is not overly assured in any way, shape or form.

Even if one were to argue that there was some prophesying in this, it is not uncanny for God to use false prophets or demonic influences for His will. The prophet Micaiah saw the Lord granting permission to a spirit to entice Ahab through his false prophets, so that the king would go up and make war against the Syrians (1 Ki 22:19-23). God has even taken credit for granting deception to false prophets (Eze 14:9). This reality certainly works for either side of the "Is Samuel/Isn't Samuel" debate: it is possible that God, just this once, permitted Samuel to be raised so that he may announce Saul's upcoming judgment; it is also possible that God permitted some knowledge to the familiar spirit for His own purposes.

So in the end, the question of whether or not it was really Samuel seems to still be an interesting point for discussion. I would lean more towards it was not really Samuel, and for all the reasons I outlined before. However, I don't believe this is an issue to divide churches or brotherhood over, and further discussion can be made with a high level of Christian charity. We must also not forget the bigger message with this episode: Saul had sinned against God and was unrepentant, and thus God brought judgment upon him. Let us thank the Lord for His righteousness in forgiving us while we were yet sinners, and pray that those outside of Christ may come to a full knowledge of the truth and thus escape future judgment.
Email ThisBlogThis!Share to TwitterShare to FacebookShare to Pinterest
Posted by Tony at 7:35 PM