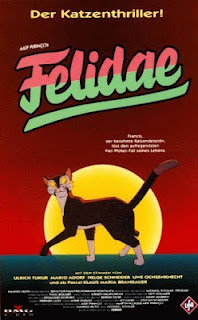 The following post has some spoilers - just a fair warning!
Sometime ago I watched the 1994 German animated film Felidae. Based off a German novel by the same name, the film tells the story of Francis, a domesticated cat whose owner moves into a neighborhood wherein he soon discovers that there's a cat serial killer on the loose. In the investigation that follows, Francis discovers that it's another cat named Paschal, who had gone through animal testing. In the process, Paschal had learned a lot from the humans, including the concept of genetics, from which he designed a plan to create a "super cat" (code-named "felidae") bred from preferred specimens - the murders were to remove the "unwanted" genes from the neighborhood. After a fight in which Francis fatally wounds his opponent, Paschal laments, "Look at me now, and all you see is evil, yet once I was good." Francis later tells a friend, regarding Paschal, "He lost his innocence, as man has lost his."

It's a really interesting film, though definitely not one for kids (but it's a false presupposition to think all animation should be). What I found most interesting was the film's interpretation of mankind's sinfulness. Namely, it recognized that man was inherently evil, and Paschal had been good until he interacted with the teachings and beliefs of men, wherein he became evil. The cat was not corrupt until he encountered, was taught, and embraced mankind's corruption. All the same, the film seems to take a Pelagian mindset near the end, when Francis tells the audience that it's still possible for humans to be as innocent as animals, achieving what ultimately truly is "felidae."

In some ways this mindset is very true. For certain, some levels of cruelty exists in the animal world: ants make war, invade, and even enslave other insect colonies; cats themselves are known to play with their prey before finally killing them; wolves and other predators will purposefully taunt, wound or tease their fleeing prey before finally going in for the kill; some animals will eat their young or the young of other mothers. Yet with animals, there is a certain purpose behind all this. For many, such as ants and cats, it is nothing more than instinct. For others, such as wolves or other predators that gradually kill their fleeing prey, it allows them to weaken their opponent to make for an easier kill. For others still, the eating of children is merely for the purposes of survival or fear of competition with their own young.

With humans, however, there is a greater level of cruelty, because our level of cruelty is mixed with our reason, our emotions, and our intellect. During the climactic defense scene in Straw Dogs, what made the actions of Dustin Hoffman's character so shocking was not necessarily just that he was doing them, but that, early on in the film, he had been established as an intelligent character, and now that intelligence was being used to harm or kill other human beings. Perhaps what still makes the Holocaust the most horrific form of genocide in human history is the fact that it was human ingenuity mixed with human cruelty. The Nationalist Socialists and their sympathizers hated certain undesirables in society, and had now found a way to eliminate them in the most efficient, cheapest, and quickest way possible. While Mendel (who is mentioned, and even depicted, in the film) had no wicked intentions with his study of genetics, he surely would be horrified to learn what man has since done with it. On this level, even the fiercest shark or the meanest wild animal seem far more civilized than humanity.

All the same, that still brings us to the issue of animals as a role model. One difference between mankind and animals is that mankind is able to distinguish between right and wrong on a basis of moral codes. Try discussing why war is ethically wrong to a colony of ants invading a termite hill, and you won't get any where. Try to tell a male stray dog sexually assaulting a female stray dog why rape is bad, and you'll achieve nothing. Certainly animals can be conditioned to feel guilt or remorse, but without this training they would care otherwise. A dog raised from a pup to know not to relieve himself on the carpet will show remorse when you scold him for doing so because he recognizes why he is being scolded; a dog never trained to know whether the grass or the carpet is the bathroom will not care, no matter how much you yell at him.

In fact, Christian tradition has often used animals as an example of what man is like when he sinks low. The reason devils today are often depicted with tails and horns is because early Christian art added such features to depict visually how an "animal-like" state might look. Jude, in his epistle, compares the false teachers and heretics as being "unreasoning animals" (Jude 1:10). If you poke a lion with a stick, he doesn't know well enough to take deep breaths and count to ten - at some point, he will attack you, because that is what his bare animal instincts tell him. In the same manner a human being who lashes out with wild, violent anger that he knows is otherwise wrong is sinking to the level of animals.

All mankind has, within themselves, some level of judgment. The apostle Paul wrote that men "by their unrighteousness suppress the truth" (Rom 1:18), and likewise "know God's righteous decree that those who practice such things deserve to die" (Rom 1:32). We see this in the fact that even the most ardent atheists, who might deny some of the moral law, will nonetheless accept much of the moral law (even at times, ironically, to attack God). Even a person who denies moral absolutes will quickly change their tune if you then attempt to vandalize their car or commit bodily harm against them. Even those who might want to argue for a kind of plain "universal" moral law inherent in all people must then answer: 1) upon what basis is this accepted, outside of plain majority (argumentum ad populum); 2) to where is this sense of morality sourced, if not to divine commission nor to moral instincts rooted by a great designer?

The fallen man, therefore, lives in a strange kind of state: he is half true man, half animal. We know the moral law subconsciously, and yet we are enslaved to sin and behave like animals. The apostle Paul writes to believers that, before we were quickened by God, we "lived in the passions of our flesh, carrying out the desires of the body and the mind, and were by nature children of wrath, like the rest of mankind" (Eph 2:3). We were like the heretics and false teachers described in Jude's epistle, living as unreasoning animals. There's a difference between animals and humans here, however: we are guilty of our sins before God because we know better and should know better. A shark that eats another fish because he's hungry isn't going to be judged before God for doing that; a man who kills another man out of malice will stand before God as a murderer, and will be judged for every other sin he has committed.

In a sense, there is innocence in animals. In another sense, humans are also animals. Humans by their nature move towards animalistic tendencies which leads them to sin. They are, however, able, by the grace of God, to be regenerated and move further and further away from their animalistic tendencies so that they can, again by the grace of God, be glorified in the truest sense of "felidae." God bless.
Email ThisBlogThis!Share to TwitterShare to FacebookShare to Pinterest
Posted by Tony at 10:00 AM