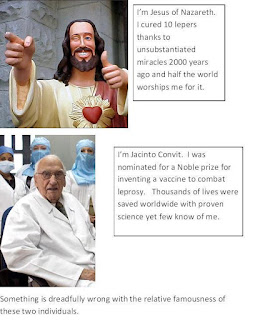 The image to the left is a meme I saw shared on Facebook recently. It shows a statue of Jesus saying: "I'm Jesus of Nazareth. I cured 10 lepers thanks to unsubstantiated miracles 2000 years ago and half the world worships me for it." It then shows a picture of Jacinto Convit, the Venezuelan medic, saying: "I'm Jacinto Convit. I was nominated for a Noble [sic] prize for inventing a vaccine to combat leprosy. Thousands of lives were saved worldwide with proven science yet few know of me." At the bottom of the meme read the words: "Something is dreadfully wrong with the relative famousness [sic] of these two individuals."

Like most memes, this is obviously meant to do little except extract the "That's cool!" reaction from its target audience. All memes are guilty of that, not just ones such as this. Usually when I encounter these things, there's so little to say that I just move on with life. Part of me, however, felt a bit compelled to offer something of a response to this, especially if this is going viral. It's often good to take time to examine and respond to this kind of argumentation and mentality. So, let's review what this meme is trying to say.

First and foremost, however, let's establish that men like Convit do deserve recognition for their hard work. Ironically against the purposes of this meme, Convit actually doesn't want personal recognition and fame for his work (source), but nonetheless men like him should be appreciated for what they contribute to society. I think people of every faith would agree with me on this. There are many unsung heroes in the world of science and medicine.

That being said, let's continue on to address the statement made by this meme.

We see a statue of Jesus saying, "I'm Jesus of Nazareth. I cured 10 lepers..." Obviously this is making reference to the story in Luke 17:11-19, wherein Christ heals ten lepers, one of whom was a Samaritan and actually came back to Christ to praise God. It's a story about faith and a precursor to the acceptance of Christ by the Gentiles, not about why we should worship Jesus (but we'll get to that later). Furthermore, Christ healed far more than these simple ten, as any one who has seriously studied Christian scripture is well aware: an individual episode involving a leper is recorded in all three synoptic gospels (Matt 8:1-4, Mark 1:40-45; Luke 5:12-16); Christ tells the disciples of John the Baptist that lepers (plural) have been healed, even before the incident with the ten has occurred (Luke 7:22), suggesting there were plenty more. The meme creator is cutting Jesus a little short by stopping at just ten.

The statue likewise says that the latter account is "thanks to unsubstantiated miracles 2000 years ago." Here we have to ask what we mean by "unsubstantiated"? Do we mean there weren't any medical records of the individuals before and afterward? There weren't any detailed medical files with x-rays, examinations, and the like? I suppose that would be true, but such technology didn't exist back then. We might as well disregard any medicinal healing or accounts of medicine before the invention of modern equipment or understanding. We might as well forgo the idea that the ancient American civilizations practiced any kind of surgery that was in any way successful. We don't have to stop there either - perhaps we should throw out Pliny the Younger's account of Mount Vesuvius erupting because he went straight from his own eyewitness account, which was "unsubstantiated" by anything such as seismic readings or geological study.

If we mean "unsubstantiated" as in these healings had no merit even at the time they were recorded, then that is likewise erroneous. The vast majority of the specific healings in the New Testament, in which the gospel writers go into further detail, involve either a large number of witnesses or a sickness or condition which was knowable and able to be confirmed. It wasn't like today's faith healers, where an individual comes up on stage out of the blue, refers to a vague sickness or a condition that one can't readily see, and then is declared healed. The blind man of John 9, for example, was recognized by all the people as having been born blind, and the Pharisees even brought in his parents to confirm it. It would have been impossible to have faked such a healing. Another such healing is the man with the withered hand (Matt 12:9-13; Mark 3:1-5; Luke 6:6-10), who was a regular visitor to the synagogue and therefore seen by everyone there to have, indeed, had a withered hand. It was a visible condition that was well known to be substantiated by those in Christ's presence, and when his hand was healed, it was a transformation that was readily known and accepted by all. This is combined with the fact that the gospels were written by either eyewitnesses to the life of Christ, or by those who had access to those who were eyewitnesses - the gospels were not written hundreds of years later and reliant upon legends and rumors like many stories of other historical figures were. The earliest manuscripts of said accounts were far closer to the original authors and far more consistent with other manuscripts than many other works of antiquity that deal specifically with history (for example, Caesar's Gallic Wars).

On a side note, the mention of something being done "2000 years ago" is irrelevant, unless this is the "because something is older, it can't be trusted" fallacy. Anyone who wishes to make such an argument would have to then answer the question: how long does something have to have existed before it is declared untrustworthy?

Finally, we see the part where the statue of Jesus says, "half the world worships me for it." This is completely and utterly false. No one worships Jesus because he healed lepers - they worship him because he is God. If Jesus had healed not one single leper, it would not be an issue. He was the Eternal Word made flesh (John 1:14), the great I AM who existed before Abraham (John 8:58), and the one before whom every knee will bow and confess that he is Lord (Phi 2:9-11). His miracles confirmed who he was in regards to his status as the Messiah and the fulfillment of Old Testament prophecies (as seen in Isa 26:19, 29:18, 35:5-6 and others) but the worship and adoration of Christ does not rise and fall on whether or not he performed a certain number of miracles. As I say to Muslims who ask if Jesus ever said "I am God," if Jesus is God then he deserves worship owed to God - Q.E.D.

So we are told by our meme, "Something is dreadfully wrong with the relative [fame] of these two individuals." Actually, there's nothing wrong. Convit is well known in medical circles for his medical work; Christ is well known among men as the Lord God. To try to compare the two is comparing apples and oranges; to try to associate Convit's partial obscurity with the well known status of Christ, as if the one affects the other, is a weak connection at best.

Inspired by all this, I now present the following countermeme.