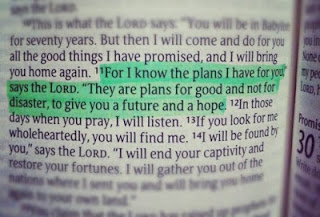 Recently on Facebook I came across the image on the left, which someone had placed up as their profile cover. I asked the person: "Are you an ancient Jew living in Babylon?" My comment got deleted and I was told not to post it again. I explained my position in a detailed, respectful post, in which I went over the context, as seen in the very image itself. You can see in verse 10 that the Lord, through the prophet Jeremiah, states: "You will be in Babylon for seventy years. But then I will come and do for you all the good things I have promised, and I will bring you home again." Immediately, what is the context? Who is being spoken of in this verse? The Jews who would live in the Babylonian Captivity, which was to last seventy years. They're the subject of discussion. We then go to verse 11: "For I know the plans I have for you"...now let's stop here - who is the you here? It's still the same context; that is, it's the Jews of verse 10. God is saying: "For I know the plans I have for you [the ancient Jews enduring the Babylonian Captivity], plans for good and not for disaster [that is, the nation would be restored], to give you a future and a hope [that is, that their nation and Temple would be rebuilt]." It isn't about people living in the year 2012, and the "good," "future" and "hope" are all specific. You can especially see this latter point later on in verse 14, where the Lord says, "I will end your captivity and restore your fortunes. I will gather you out of the nations where I sent you and will bring you home again to your own land." Again, I'm demonstrating this from the very image itself: it shows that the highlighted verse is being taken out of context. All this was what I wrote the individual - and my post was, of course, immediately deleted, as was any evidence a conversation had taken place. Social media is, for many, a chance to "by their unrighteousness suppress the truth" (Rom 1:18).

I have been told that people will read the Bible and see the context any way, but I don't believe people really do. How many times have we heard this verse uttered on K-LOVE? How many times have we seen bumper stickers of this? How many times have we seen this sold on goofy business cards at Christian bookstores? How many times has this been shared on social media like Facebook? If people as a whole understood the context of the verse, they wouldn't abuse it so frequently. I've beaten this dead horse before, I know. Some might be sick of hearing about it, or wonder why I spend so much time on it. Why is it such a pet peeve for me? I'll tell you why. It's because this kind of thing teaches "feel good" theology. It teaches a sappy world where God just wants you to be happy. It tells you good things will only get better, because that's what God wants.

Folks, you don't need to be the love child of Jonathan Edwards and J. Gresham Machen to understand how bad a theology that is. Even an extreme atheist will tell you life is not like that. Sometimes life just stinks. Only too recently I experienced some of the worst years of my life. By God's grace, my life is doing better now, but who am I to suppose the circumstances around the end of my life will be happy? The fact is, the "plans" God may have for your life, especially near the end, may not be "good" or "hopeful" with a great "future" ahead. As I've brought up before, you might end your life peacefully, or you might end it like Paul, Ignatius, Tyndale, or Bonhoeffer - killed for your faith in an embarrassing or violent way.

What will you do, dear Christian, if God does not desire hope and goodness for your future? What if He desires suffering, as many early Christians endured? What if He desires that you shall lose your high paying job (as the apostle Paul did), or lose a beloved one (as the prophet Ezekiel did), or find yourself hated by most within your society (as the prophets Elijah and Jeremiah did)? Where will be your faith then? What drove the early Christians on as they endured three hundred years of persecution? Was it the silly idea that eventually they would find greener pastures because of eisegeting an Old Testament passage? Or was it because, as the apostle Paul wrote, they considered "the sufferings of this present time are not worth comparing with the glory that is to be revealed to us" (Rom 8:18). Do you truly have this mindset, dear Christian? Are you ready to endure pain and anguish in this life knowing that God has provided the one thing you truly need? That is, your very redemption. Are you ready to be like the blind man in John 9 who, after persecution and banishment, still desired to see and worship Christ? Do you have such a heart?

Consider these things prayerfully. God bless.
Email ThisBlogThis!Share to TwitterShare to FacebookShare to Pinterest
Posted by Tony at 10:51 AM