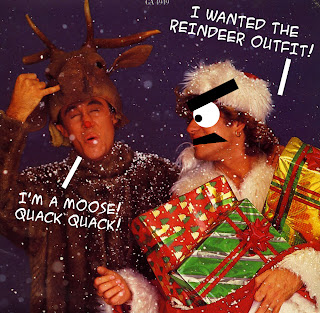 So as many who read this blog know, I have an undying abhorrence for the song The Christmas Shoes. For those who are new to this vendetta of mine, read my post here. However, I thought I would take a break from lamenting the "Thomas Kinkade of Christmas music" to talk about another song. This song is none other than 1984's Last Christmas, sung by the British duo Wham! It was a huge hit when it was released, but I know a few people who hate this song, some of whom refuse to even be in the same room where it's playing.

Now, I personally don't necessarily hate this song (not on the same level on which I loathe The Christmas Shoes), but I can understand why other people dislike it. I thought it would be fun to examine it on this day, the eve of Christmas, and discuss just why some people are repulsed by this holiday diddy. Let's start, like we did with The Christmas Shoes, by reviewing the lyrics:

Geez Louise  people. Granted, some might legitimately contend that there are far more depressing Christmas songs out there. For example, Bob Geldof's Do They Know It's Christmas?, released about that same year, makes reference to world hunger. Other songs, such as the Reggae Santa Clause (Do You Ever Come to the Ghetto?), speak for themselves. However, I think what makes Last Christmas stand out is the fact that it really, truly isn't about Christmas in the sense that it maintains a Christmas theme like other songs do. For example, look at the lyrics that follow the chorus:


Once bitten and twice shy
I keep my distance but you still catch my eye
Tell me baby, do you recognize me?
Well, it's been a year, it doesn't surprise me

I wrapped it up and sent it
With a note saying 'I love you,' I meant it
Now I know what a fool I've been
But if you kissed me now I know you'd fool me again

All right, so some might argue that the "wrapping" and "giving" parts of the song might lend itself towards Christmas, but keep in mind that gift giving and gift wrapping are not always associated with Christmas, and can happen at other times throughout the year. The fact is, these lyrics could fit with any other song. Still don't believe me? Look at the other lyrics:


Crowded room, friends with tired eyes
I'm hiding from you and your soul of ice
My god, I thought you were someone to rely on
Me, I guess I was a shoulder to cry on

A face on a lover with a fire in his heart
A man undercover but you tore him apart
Ooh hoo, now I've found a real love
You'll never fool me again

Seriously, if you were flipping through radio stations, came across these lyrics being sung, and had never heard the song before, you would never guess it was a Christmas song. I'll admit I don't know the back story to the song being written, but it wouldn't surprise me if it was originally written without a Christmas context, and the bit about Christmas was added to make it marketable for the Holiday season. You could literally fit it into any other holiday. Observe:

Heck, it doesn't even have to be a holiday, just choose any day of the week. Observe:

See?! I got lyrics to top the charts. I mean this whole song just feels like a generic romance song they converted into a Christmas song. You could do this with other songs for the same effect. Observe:

See? I took a song about a fatal car crash that claimed the life of the narrator's girlfriend into a Christmas song! Sure the rest of the song has nothing to do with Christmas, but who cares? I got the word "Christmas" in there, it's officially a Christmas song. Now all I need to do is make a music video with a bunch of young couples wandering around a ski resort shooting angsty looks at each other, and I'm good to go!
Email ThisBlogThis!Share to TwitterShare to FacebookShare to Pinterest
Posted by Tony at 10:00 AM