Did I Misquote Jonathan Edwards?

As those who read this blog post know, I'm a bit of a Jonathan Edwards fanboy. I don't agree 100% with everything the man wrote and said (and I'm not Postmillennial like he was), but if I had to pinpoint a theologian who had a major influence on me, it would be him. As such, I'm fairly familiar with his writings and beliefs...and one of the things that has always bothered me was how those in the Houses of Prayer movement considered him to be one of their own. This is often because of his love for evangelism and revivalism, and certainly he had a very high view of prayer (as do I), but on many core doctrines regarding prayer and the relationship between man and God in prayer, Edwards and the Houses of Prayer movement have some significant differences.

A few days ago, I saw a tweet by Julie Meyer, who is described on her website as "a longtime and beloved worship leader and songwriter at the International House of Prayer in Kansas City since its beginning in 1999." She's also rather infamous in discernment circles because of her wild prophecies, mostly stemming (like Lou Engle) from her dreams and so-called visions. In the tweet, Mrs. Meyer wrote:

In the blog post, she wrote on a supposed prophetic dream she experienced, and made mention of the First Great Awakening:


I heard a fresh cry exploding out of Heaven – an invitation for the nations to become part of the prayer movement that is blowing across the face of the earth like an unstoppable wave leading to a Great Greater Awakening.

I was told in the dream to study and look back to the 1700s and the first Great Awakening – for this is our story. We are invited to say “yes” to prayer – we are invited to all become part of the story.

This prompted me to respond to the tweet, which started a conversation: 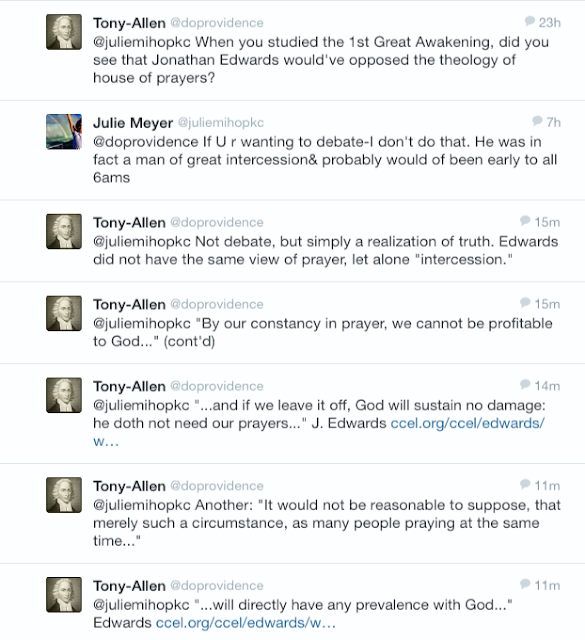 These two quotes are, of course, ones that I've shared before.

After I began this conversation, Joseph H. Meyer came in as well, attempting to explain my quotes with: 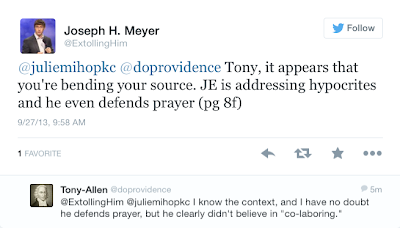 Then Julie Meyer came back and gave one of the most interesting responses to facts that I've ever seen. 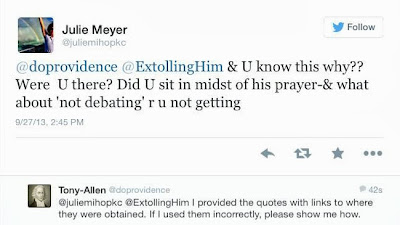 I'm often amazed how the ones who are the most defensive in the face of discernment or critical thinking are often those who supposedly hear from God Himself. I thought Mike Bickle said that IHOP-KC encouraged critical thinking and discussion? But I digress...

Now granted, I am willing to admit that I might have misused Jonathan Edwards, so after this brief exchange, I went and examined what Edwards said around those quotes. What did I find?

Let me present the first quote, in a more fuller context:


Seeing therefore you stand in such continual need of the help of God, how reasonable is it that you should continually seek it of him, and perseveringly acknowledge your dependence upon him, by resorting to him, to spread your needs before him, and to offer up your requests to him in prayer.—Let us consider how miserable we should be, if we should leave off prayer, and God at the same time should leave off to take care of us, or to afford us any more supplies of his grace. By our constancy in prayer, we cannot be profitable to God; and if we leave it off, God will sustain no damage: he doth not need our prayers; Job xxxv. 6, 7.—But if God cease to care for us and to help us, we immediately sink: we can do nothing: we can receive nothing without him. [source]

The contention made by Mr. Meyer is that this message is delivered towards hypocrites. This is absolutely true, but if we leave it at this, we find a common problem in discussion where context can work against us. This statement might make some people go, "Wait, what?" given how, in my blog posts and podcasts, I have stressed the importance of understanding and adhering to context. However, there can be a time, either in discussion or debate, where someone might appeal to the overall context of a passage or work in order to ignore a minor or side point made, or to attempt to refute a minor or side point made.

Let me give an example to demonstrate this: a long time ago, I was having a conversation with a gentleman regarding true and false gospels and the Roman Catholic Church. I went to Galatians 1:8-9, where Paul clearly states: "But even if we, or an angel from heaven, should preach to you a gospel contrary to what we have preached to you, he is to be accursed! As we have said before, so I say again now, if any man is preaching to you a gospel contrary to what you received, he is to be accursed!" The gentleman responded by saying that Paul was talking about the Judaizers in Galatia, therefore it was irrelevant to bring this up about Rome. I replied back that, while the Epistle to the Galatians was indeed spurned on by the Judaizers and dealt with that issue, Paul is clearly here broadening out the scope not only of Judaizers, but other people as well. We see this when he says "even if we" (meaning the apostles, who were not Judaizers), or "an angel from heaven" (again, a non-Judaizer), should preach a false gospel, they should be anathema. He repeats this again with "if any man," hence broadening this out to all non-Judaizers. Therefore, bringing up that Paul was writing to the Judaizers is really a non sequitor - Paul is clearly talking about much more than just Judaizers here. While most people miss the forest for the trees, the gentleman's problem here was the exact opposite: he was missing the trees for the forest!

So in our case, is Jonathan Edwards addressing and discussing hypocrites in the overall point of this message? Absolutely. Does that mean every single tiny thing he wrote in the message was about hypocrites, or solely referring to hypocrites? No, not at all. In the section regarding God not needing our prayer, two things are painfully clear:

2) Edwards is not talking specifically about hypocrites and their use of prayer, but is speaking of a general reality regarding prayer. He even cites Job 35:6-7 as a scripture to back up his viewpoint, in which the question is asked: "If you are righteous, what do you give to him? Or what does he receive from your hand?" Obviously, Edwards was expecting a firm "Nothing at all!" for this question.

The point Jonathan Edwards is making is that God will be neither harmed nor helped by our praying or lack of praying. In Edwards' mind, the righteous person does not contribute anything towards God that God would somehow need or otherwise lack. Compare this, now, with a quotation from Mike Bickle:


Today, God requires our intercession to release the fullness of His power and justice on earth. As we speak, or pray, God’s will back to God, the Spirit releases it on the earth. If we do not speak out God’s Word, then the power of the Spirit will not be released in the same measure. God requires holy, persevering, believing prayer to release the fullness of what is in His heart. The fullness of God’s justice will only be released in the context of night and day intercession. [pg. 36, Seven Commitments of a Forerunner]

Jonathan Edwards taught that God profited nor lost anything by our prayers. He taught that God did not need our prayers. Mike Bickle, and many others like him in this Houses of Prayer movement, teaches that God requires our prayer in order for His "power and justice" to be released on the earth, and the fullness of this can only be realized by continual night and day prayer. Jonathan Edwards would have heard this and probably argued it put too much focus on the power and role of man, which it most certainly does.

Let us now turn to the second quotation:


Though it would not be reasonable to suppose, that merely such a circumstance, as many people praying at the same time, will directly have any prevalence with God; yet such a circumstance may reasonably be supposed to have influence on the minds of men. [source; emphasis in original]

Jonathan Edwards had been writing on the importance of prayer, and, up until this point, the power and importance of prayer. Then he pauses to open up with a certain truth: it is not reasonable (that is, it would be wrong) to suppose that a bunch of people praying at the same time will have any significant effect on God. He will go on (as we see in the quote) to talk about the effect it will have on the body of believers, and while IHOP-KC followers will no doubt say here, "Yeah, we believe that too!", we must understand the limitations Edwards has placed on the body of prayer. That is, Edwards has stated that gathering a bunch of people together and having them pray at the same time for something (ie., the "prayer culture" of IHOP-KC, TheCall, etc.) will not have any direct effect on God, or be in any way different than one person praying alone in their prayer closet.

It should be noted here that Edwards is nowhere talking about hypocrites in this quote; he's simply touching on prayer. In fact, the full title of the work cited is: An Humble Attempt to Promote Explicit Agreement and Visible Union of God's People in Extraordinary Prayer, for the Revival of Religion and the Advancement of Christ's Kingdom on Earth (whew!). In other words, he's touching on a subject many people at IHOP-KC harp on. As I said before, Jonathan Edwards is often quoted at IHOP-KC because of his love of revivalism and evangelism, but the real problem is what specific beliefs did he hold regarding some of their core tenets related to the subject? As we've seen here, he would have thought the IHOP-KC theology was founded upon erroneous doctrine.

So did I misquote Edwards? Actually, I used him perfectly in context, and my conclusion from them was the same conclusion drawn by Edwards.
Email ThisBlogThis!Share to TwitterShare to FacebookShare to Pinterest
Posted by Tony at 10:00 AM