A Simple Review of "October Baby" 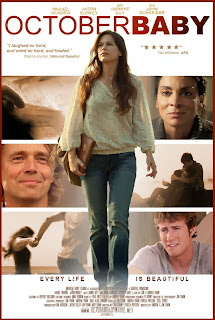 Several weeks ago, my wife and I were still on a "Christian movie" fix after having something of a weekend marathon with Flywheel, Facing the Giants, Fireproof, and Courageous. Cruising through Netflix, I suddenly remembered that my wife had made mention of a 2011 movie called October Baby, about a young woman who discovers that she is, in fact, adopted, and that her original mother had tried to abort her. It sounded interesting, so we decided to give it a watch.

The film opens up with Hannah (Rachel Hendrix) suffering from another spell of epilepsy. While at the doctor's office with her parents, it is revealed that she was adopted. Of course, this would probably stun anyone, but on top of this, it turns out she had been the product of a failed abortion. Said abortion happened in Mobile, AL. Hannah's old childhood friend and awkward love interest Jason (Jason Burkey) happens to be headed to New Orleans with some friends, hitting Mobile along the way. While there, Hannah does some investigation, finding out that her mother is now a famous lawyer. Their first confrontation leads to a rejection, and her adoptive father arrives, leading her to come to grips on accepting her past and present situation.

If I sound like I'm having difficulty describing the plot of the film, there's good reason for that. Truth be told, October Baby is really two movies: on the one hand, it's a decent film about a young woman realizing she was the product of a failed abortion; on the other hand, it's perhaps one of the worst teen-bopper movies I've ever seen.

The road trip to Mobile plot is, really, just a long plodding part of the movie. Part of this is because of the obvious conflict between Jason and Hannah, who secretly love each other but can't admit it. This could have been fine all it's own, but they turn it into a love triangle by adding in that Jason has a girlfriend, Alanna (Colleen Trusler). Granted, this also could have been an okay addition, but unfortunately Alanna's character is not treated well at all: she's the cliche evil girlfriend with absolutely no redeeming qualities, and who serves as the foil to the lead female character, making you feel sorry for Hannah and assuring you it's perfectly fine when Jason ends up breaking up with Alanna at the end. On top of this, Alanna is comically evil, as seen in a sequence where Hannah and Alanna are forced to share a hotel room: Alanna does nothing but openly insult, belittle, and mock Hannah, to the point that the latter leaves the hotel room and continues the journey on her own. Most girls would be more subtle, and it might have been more effective to have subtlety. Unfortunately, the screenwriters don't want that - you're supposed to hate Alanna, so Alanna must be evil. Mwa ha ha.

Add to this the goofy "love" montages between Hannah and Jason. What I mean by this are various sequences where Hannah and Jason will either be frolicking on the beach, staring into space in separate places, or just spending time together, and a song will be playing over the scene. Near the end of the movie, it started to feel like most of the 107 minutes were just these "love" montages. I was beginning to have flashbacks of the film Twilight, and the annoying, oft repeated scenes of Bella and Edward staring at each other while new age music plays. It didn't work then, and it doesn't work here (granted, a lot didn't work with Twilight).

Worst yet about this road trip plot is that it ultimately goes nowhere. You're introduced to all these characters, such as the hippie Bmac (he loves hamburgers...GET IT?!), but you either never see them again after Hannah leaves the hotel, or you only see them briefly in a later scene. Really, the whole thing becomes a waste of time. It felt like the filmmakers were trying to appeal to young adults by making a Christian equivalent to all the teen-bopper films that had come out in the past decade, but this (along with the love triangle) only serves to distract from the main plotline. There was one point where I was actually thinking, "Hey uh...wasn't there something about an abortion in this movie?" It's really unfortunate when you watch a movie and suddenly realize that the topic of murdering newborns has become more preferred.

Midway through the film I just got downright bored. In fact, it was at this point, right as my boredom was setting in, that my wife admitted to me that she never watched the film the whole way through. This was followed with punishment by tickling.

There are also some annoying plot holes that come from this little road trip. Like how did Jason manage to have enough money not only for hotel rooms, but a rental car? And where did he pick the car up? How long did he reserve it? Where did he return it? I've rented plenty of cars in my time - they're definitely not cheap, and they're not easy to acquire. Also, Bmac is supposed to be knowledgeable of VW vans, but his idea of sleeping in it is to do so in the two front seats (they're famous for having enough sleeping space in the back). When a beach cop (Robert Amaya, a.k.a Javier in Courageous) catches them with their van parked on an endangered sea turtle dune, he just up and lets them all go without another thought because Hannah says she's trying to find her aborting mother (yeah, sure, like any cop would just immediately believe that, or overlook endangering sea turtles). When Hannah and Jason break into the abandoned hospital where she was born, the lights somehow still work. When Hannah meets the nurse who signed her birth certificate, they sit down for a drink...with it having been established that Jason was outside in the car. Really? They're just going to have him sit out in the car while they enjoy a little chit chat? They're not going to at least invite him in or something? In one scene, Hannah makes a big deal out of her being a virgin, and not wanting to sleep in the same bed as Jason...and then a few minutes later they're falling asleep on the couch together, cuddled up. It's also hard to believe that while Jason is established as the "popular" boy, someone like Rachel Hendrix would not have been popular among young males. Yes, I know her health problems would have probably driven a lot away, but it's hard to imagine that she would be the "outcast" at any school.

When the goofy road trip plot gets abandoned, and we return to the main storyline, the film's quality actually turns for the better. The filmmakers actually did handle the conflict well, especially in regards to dealing with the issues of forgiveness and moving on. While I've been critical of the script's handling of characters in the first half, I do have to admit that I felt for Hannah in regards to her relationship with her natural mother (Shari Rigby), and then later with her adoptive parents.

One thing I was surprised with, however, were the theological issues that weren't explored. For example, I was expecting someone to bring up the issue of adoption in its relationship to Christ and our own adoption (Ro 8:15; Ga 4:5; Ep 1:5), and there were a few parts where Hannah and her adoptive parents could have explored that or represented it in a clearer light. In fact, Hannah is generally portrayed as disrespectful to her parents, and though the two groups reconcile somewhat near the end, nothing deeper is explored. I also couldn't help but somewhat roll my eyes at the part where a policeman tells Hannah something to the effect of, "Hate the crime, not the criminal," an obviously secularized version of the saying, "Hate the sin, not the sinner."

Really, the highlights of the film for me were the parts actually related to the abortion plot and not the love story or road trip elements, as well as Robert Amaya's cameo appearance. The clip over the end credits, where the audience hears the testimony of Shari Rigby and her own real life abortion, was touching, but one has to make their way through the entire movie to get there. All the faults sadly turn it into a mediocre Christian film that tries to entertain its audience more than edify them. If I had to grade it like a film critic, I would probably give it 3/5 stars. If you're looking to watch a Christian movie, this film might entertain you. If you're looking for a great movie that might edify you and give you something more to chew on than most films nowadays do, then I would unfortunately suggest you look elsewhere.
Email ThisBlogThis!Share to TwitterShare to FacebookShare to Pinterest
Posted by Tony at 10:00 AM