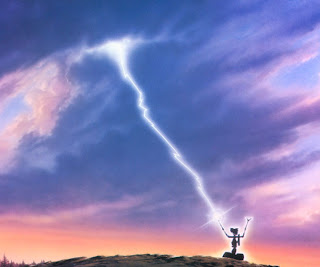 So the random thought entered my head a while ago...is the 1986 film Short Circuit a good metaphor for regeneration?

As a kid, this movie was one of my favorites growing up, and (amazingly) it still holds up for me even as an adult. For those who don't know, the film is about a robot that is one of five originally designed as a battlefield unit. Fittingly enough, he's simply known as "Number Five." While stationed outside in the rain after a test run, Number Five is struck by lightning and nearly destroyed. Brought back into his storage unit, it turns out that, due to the effects of the lightning strike, Number Five has in fact become a conscience being, just like his human creators. he quickly escapes from the weapons testing lab and goes out into the real world, beginning a quest to confirm his living status and gaining his freedom.

A few things I thought about in regards to this:

Second, before being struck by lightning, Number Five was simply living as he was programmed to do, which was to destroy. He was, in essence, enslaved by the will of his master programmers. You could have told him to go out and read a ton of book at a hyper speed or make pop culture references, and he wouldn't have done it. His way of life was set in the way of evil and destruction.

Third, after being struck by lightning, Number Five's will is turned towards a new direction. He was, quite literally, made alive. After being made alive, Number Five proceeds to obtain more and more knowledge, and become more and more human in personality and intellect. By the end of the film, he even grants himself a human name.

Granted, this post is just written in humor. I dunno - maybe I'm just looking for a way to justify showing this film to my future kids and making it somehow edifying. In the meantime, here's some 80's music goodness: