A former member of Steve Kelly's Wave Church informed me of an interesting classification they do among their members. Basically, you receive special status for how much you give to the church. I did a bit of digging online, and found some information about these monikers that people at Wave Church are granted. 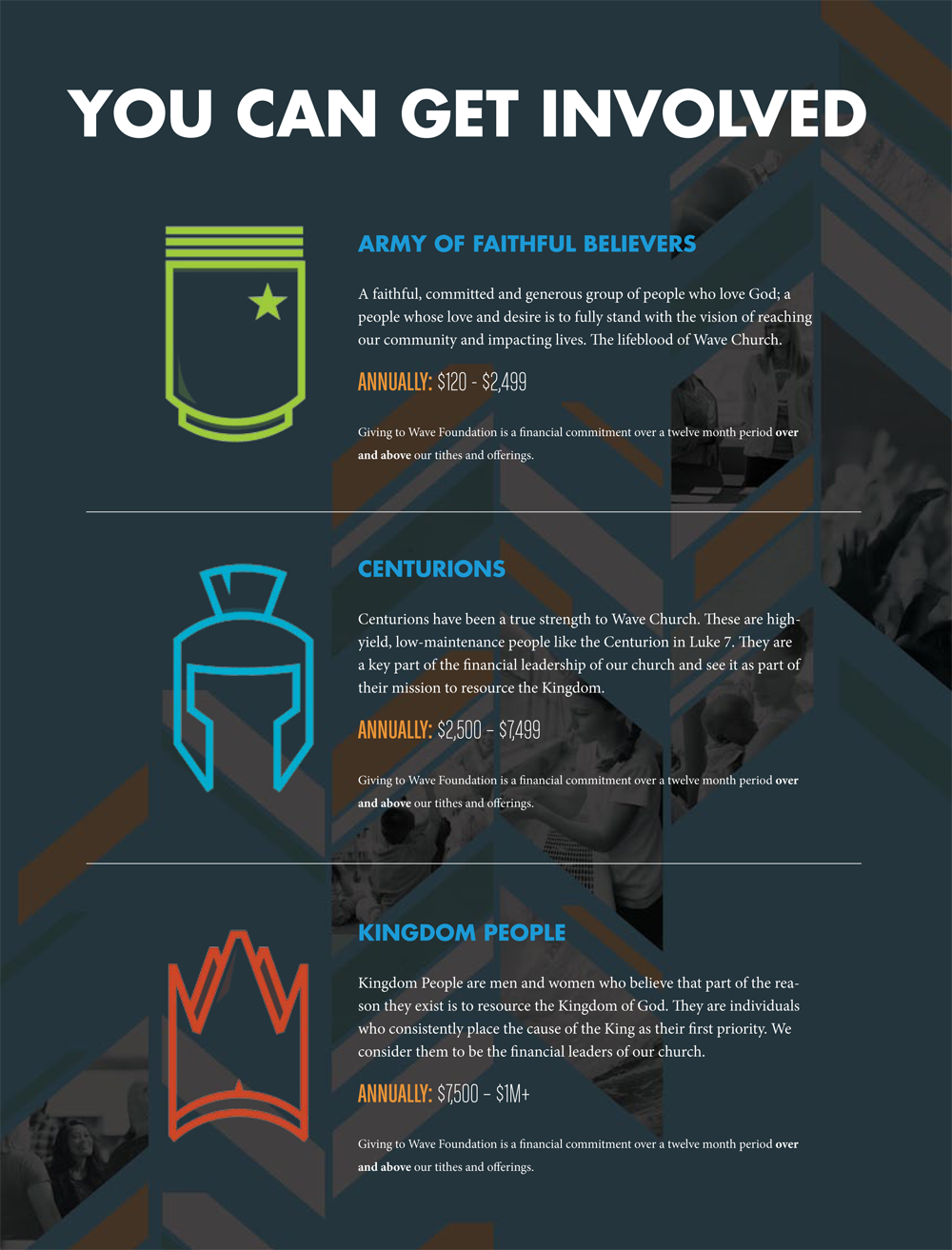 To the left here, you'll find an image showcasing the actual classification done at Wave Church (it's taken from the 2014 issue of Wave Foundation Magazine). Basically, it depends how much you give to the church ("over and above" the tithes and offerings, according to the magazine), and the titles can be separated as follows:

If you give $120 to $2,499 annually to Wave Church (why these specific numbers, I don't know), you become a member of the Army of Faithful Believers. They are considered the "lifeblood of Wave Church" (I don't know what those who give under $120 are called - knowing Steve Kelly, probably Parasites).

If you give $2,500 to $7,499 annually to Wave Church, you are called a Centurion. This title is inspired by the "high-yield, low maintenance" centurion from Luke 7...which is interesting, given that the story of the faithful centurion in Luke 7 has absolutely nothing to do with money or giving money. These people are "a key part of the financial leadership" of Wave Church, who "see it as a part of their mission to resource the Kingdom" (I suppose the Army of Faithful Believers don't).

Finally, if you give $7,500 to over $1,000,000 annually to Wave Church (remember, this is "over and above" the tithes and offerings), you are called one of the Kingdom People. Like a Centurion, these Kingdom People see "part of the reason they exist is to resource the Kingdom of God," but are those who "consistently place the cause of the King as their first priority" (I guess the Centurions aren't as consistent, or don't have their priorities straight). These people are likewise considered "the financial leaders" of Wave Church.

In application, Centurions and Kingdom People get marginally more benefits than those in the Army: Kingdom People/Centurions Appreciation weekends are held, and both groups have their own "Amazing Race" events. This is on top of the Centurions being "a key part of the financial leadership" and Kingdom People being actual "financial leaders." It's quite clear that the more you give to Wave Church over and above your regular tithes and offerings, the more and more respect and privilege you earn. While they use the phrase "kingdom of God" and claim this is about those who are assisting the kingdom, it's quite clear that this is in a strictly Wave Church context - I doubt I would gain a Kingdom People title giving $1,000,000 to a small church in rural Alabama.

More importantly, is this kind of classification any where in scripture? Were Army of Faithful Believers, Centurions, or Kingdom People mentioned in the gifts of titles listed by Paul in 1 Corinthians 12:28 or Ephesians 4:11? No, they were not. When Paul wrote on donations for the church in Jerusalem in 2 Corinthians 9, did he divide up the believers by how much money they could possibly give? No, not at all. Nowhere in scripture are these titles mentioned, taught, or even hinted at.

What this essentially does is take the church and turn it into any other club or organization. For example: one can be a Regular Member of the National Rifle Association (NRA) and enjoy some benefits; or, one could donate thousands of dollars per year and become an Endowment, Patron, or Benefactor Member, all of whom are able to vote and assist in major decisions made by the organization. Again, the same concept is seen right here in Wave Church: donate more and more money, and receive more and more benefits. Want to become a top financial leader at the church and carry a little bit more weight? Donate enough money to become Kingdom People.

This is especially unbiblical in the sense that it emphasizes benefits for how much one gives, rather than the motivations for it. I am reminded of the story of the widow's offering (Mk 12:41-44; Lk 21:1-4), where a poor widow places two copper coins into the offering box. This woman was commended by Christ because, although her amount was terribly small, she had given all she had. Most churches would recognize the importance of motivation over amount, hence why most of the time givings are anonymous or done out of private conviction. According to the ranks at Wave Church, however, the widow was not placing "the cause of the King" as her "first priority," since she had not donated the demanded (and ridiculously high) amounts.

As I wrote before, there is nothing scriptural about this. This is simply a way for Wave Church to inspire more people to give more money, and to fleece the flock more than they already are.
Email ThisBlogThis!Share to TwitterShare to FacebookShare to Pinterest
Posted by Tony at 10:00 AM