A Simple Review of "Flywheel" 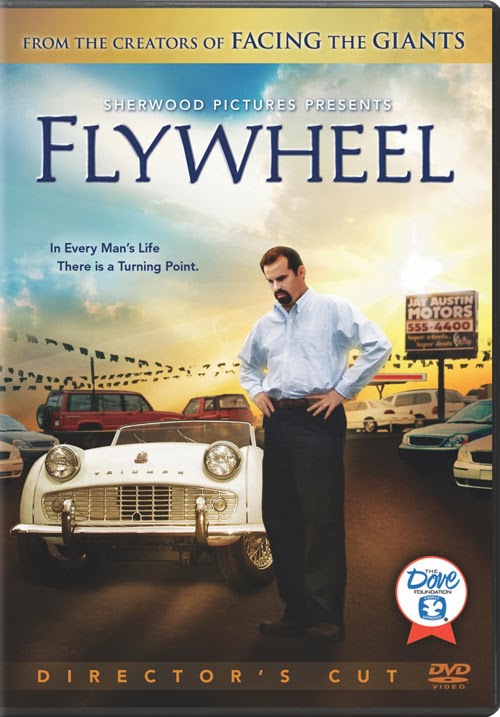 I've written in the past that I'm not a huge fan of "Christian" movies. This doesn't mean I don't like movies about stories from the Bible (I adore films like The Greatest Story Ever Told, The Passion, and The Robe), but rather I mean films targeted towards a Christian audience. Oftentimes, they have too many cliches (you almost always have the "born again" scene with Christian pop music in the background), and oftentimes all they end up being like are mediocre secular films with Christian references or "themes" thrown in.

However, through my wife, I was introduced to the films of the Kendrick brothers, Alex and Stephen, most of which were produced out of Sherwood Baptist Church in Albany, GA. Together, my wife and I watched Fireproof, followed by Courageous, Facing the Giants, and finally Flywheel. What I found amazed me: the stories were consistently good, the characters well developed, and the theological messages strong and uncompromising. Unlike most Christian films, where you have people living normal lives with an occasional "God has a plan for you" thrown in, I actually felt edified watching these films. That's not to say these movies are perfect (no movie is), nor am I saying I find them more edifying than scripture, but they provided a film experience so rare in a film about Christians.

Flywheel is centered around Jay Austin (Alex Kendrick), a used car salesman who is corrupt both in business practices and in his personal life. Over time, he begins to see that his lifestyle is not being profitable, starting with a scene where he hears his son say to a friend that he doesn't want to be like his dad. Later on, when he gives his own pastor a bad deal on a car, and he hears his pastor pray to God, "Lord, I ask that you treat Jay just the way he treated me in this deal," it begins to hit him even harder. Realizing that he is not living with integrity, and in a lifestyle opposed to God, Jay repents and submits to the Lord, vowing to do business in a way honoring to Him.

Going on at the same time, Max, the car lot's mechanic, is working on an antique car Jay had bought recently. He tells Jay that it is missing a flywheel, without which the car will not be able to run. As the car is fixed, it begins to mirror the problems and resolutions in Jay's own life.

Flywheel was the first film made by the Kendrick brothers, and was initially meant to simply edify church members and those in their local area. It was made on a budget of $20,000...and there are times when it shows. The camera and sound quality show this, especially when it becomes clear what footage is digital and what isn't. The acting is hit-and-miss, with some performances done well and some performances going terribly. The most surprising performance is by Richie Hunnewell, the young boy who plays Jay's son Todd, and does a good job for someone of his age: he only has a few lines, and most of the time he is showing expressions, but he gives a convincing performance.

However, when I speak on a film being low budget, it should be understood I've never hated a film simply because it was low budget - rather, I'm more interested in what a film did with it's low budget. I've seen films that looked like they were done with a home camcorder, but had a good story and capable directing, so that I could overlook all that. The same can be said about Flywheel. Though not quite as polished as their later films, the Kendrick brothers present a film that still carries a strong message in a way more capable than many bigger budget films. If you've seen the Sherwood movies that came out after Flywheel, you'll probably notice all the morals from those films peppered throughout this one: you have the issues of marriage and the relationship between husband and wife (Fireproof), how to be the best father your children need (Courageous), and dealing with faith in God during difficult times (Facing the Giants). The subject matter is treated with dignity and in a way that can make the viewer stop and ponder, "Is that me?" Even now, having rewatched the movie to write this review, I felt convicted to ponder if I am truly a good husband to my wife, or if I take the easy way out and only "act" Christian.

Some have criticized the film by saying that it presents a scenario where a guy becomes Christian and things get all better. I wouldn't say that's necessarily the case. For one, the Kendrick have said in other commentaries that their goal is not to say, "You start praying, things get better," only that God is faithful to His own. Their films are meant to represent ideas, not necessary realities. For certain, life for Jay Austin is not immediately easy when his relationship with God is restored: his two salesman walk out on him, he gets closer and closer to the bank taking the lot from him...things aren't always happy. Even when things turn around for him near the end, he still has an obstacle or two.

The focus on the film is not so much "Can God make your life hunky dory?", but rather it's "What does living a life devoted to God look like?" Jay has to spend much of the movie restoring the relationship with the rest of his family. Half of the film has him and his wife being snarky and yelling at one another, including an infamous scene where Jay slams his hand on the table and says, "Why don't you shut your mouth and don't open it again except to eat?" (which actually struck me as way harsher than anything said in Fireproof) Jay also ignores his son, and isn't there for him when he would like to be (one of the early scenes shows Jay's son giving his dad a drawing he made, only for Jay to casually throw it away while busy on a phone call). As Jay realizes he has not lived a life devoted to God, he begins to review his business practices, and is further convicted when he sees his salesmen repeating the exact same tactics he himself taught them. All these things need to be overcome, and eventually are in one way or another. Again, the point of the movie is not "Can I live a better life now?", but "I've been living in sin - how can I restore my life to glorify God?"

As far as I know, they haven't released the film on Blu-Ray yet, but it is widely available on DVD. I would suggest getting a copy and watching it with your family. If you can remember the film was made on a low budget, and was the first film made at Sherwood, you will definitely be able to enjoy it and find it not just empty entertainment. It is definitely worth at least a one time viewing.
Email ThisBlogThis!Share to TwitterShare to FacebookShare to Pinterest
Posted by Tony at 10:00 AM