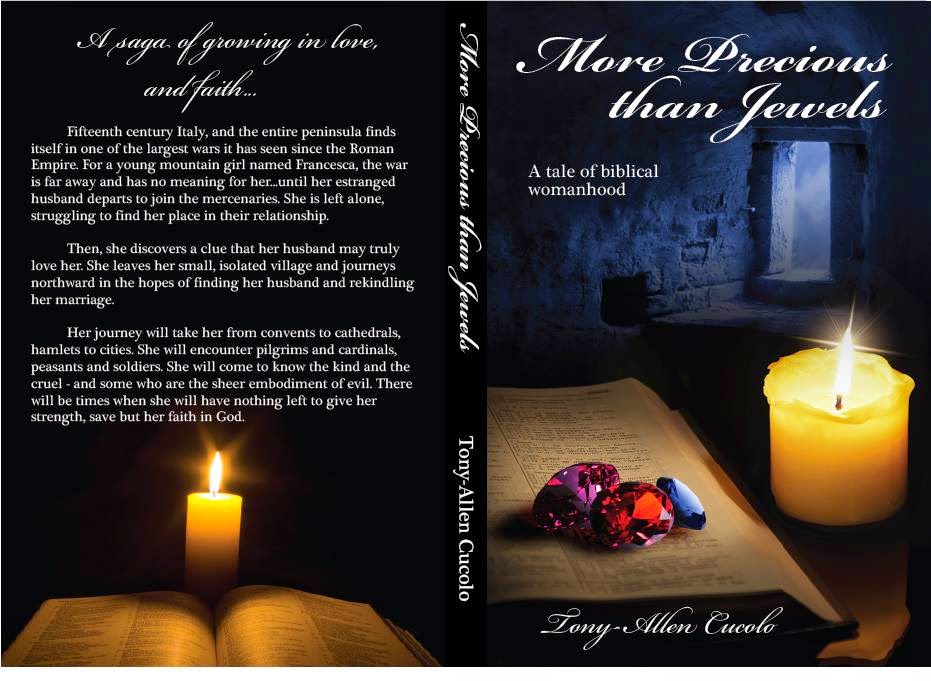 I have self published a historical fiction book which is now available in print and Kindle at Amazon. It's entitled More Precious than Jewels, and is a story which takes place in fifteenth century Italy. I intended it to be a story of biblical womanhood, inspired largely by my wife, who wanted such a story and was the model I used for the main character. From the description:


Fifteenth century Italy, and the entire peninsula finds itself in one of the largest wars it has seen since the Roman Empire. For a young mountain girl named Francesca, the war is far away and has no meaning for her...until her estranged husband departs to join the mercenaries. She is left alone, struggling to find her place in their relationship.

Then, she discovers a clue that her husband may truly love her. She leaves her small, isolated village and journeys northward in the hopes of finding her husband and rekindling her marriage.

Her journey will take her from convents to cathedrals, hamlets to cities. She will encounter pilgrims and cardinals, peasants and knights. She will come to know the kind and the cruel - and some who are the sheer embodiment of evil. There will be times when she will have nothing left to give her strength, save her faith in God.

Here are the links to the two forms of media:

To the print edition.

To the kindle edition.
Email ThisBlogThis!Share to TwitterShare to FacebookShare to Pinterest
Posted by Tony at 11:01 AM