A Response to a Supposed Calvinist Dilemma

This post is going to be in response to a supposed critique of Calvinism, using Acts 13:48 and a popular Calvinist interpretation of it. The source came from Twitter, where I saw this image shared: 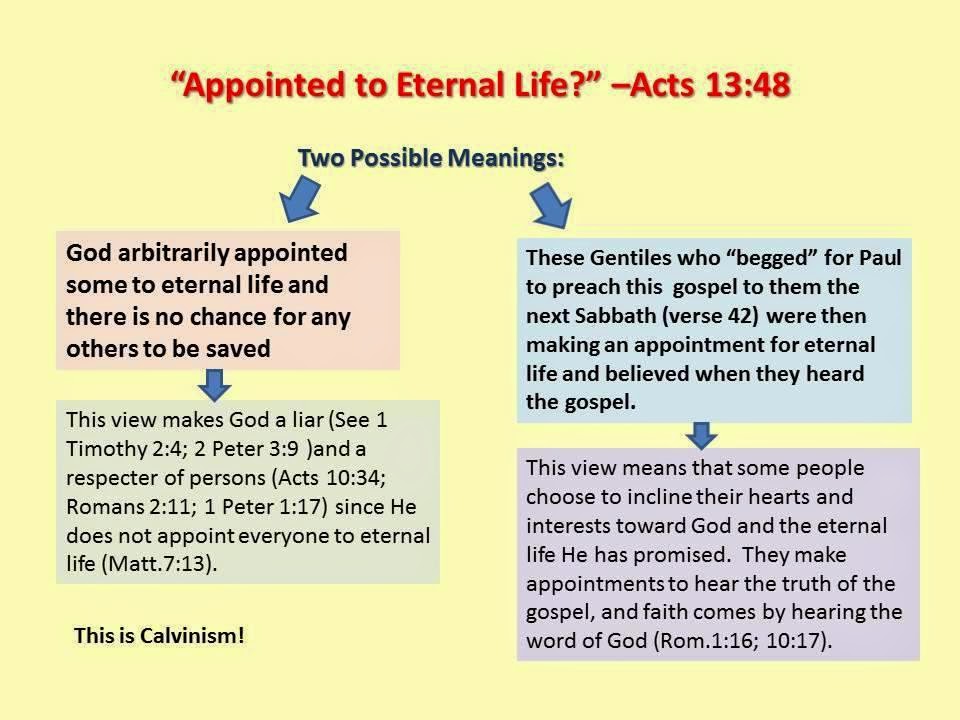 The passage in question is this:


When the Gentiles heard this, they began rejoicing and glorifying the word of the Lord; and as many as had been appointed to eternal life believed. [Acts 13:48; NASB]

This passage takes place during Paul's first missionary journey, when he and Barnabas arrive in Antioch, and experience the first major group of conversions among the Gentiles. Obviously the contention of the image is towards any Calvinist use of this verse to say that those who believed had already been appointed unto salvation. Indeed, John MacArthur, in his commentary for this verse, states that it is "one of Scripture's clearest statements on the sovereignty of God in salvation" (pg. 1461).

Generally speaking, there tend to be two major objections to this reading:

1) The appointment was for the Gentiles to receive salvation, since the Jews, as a people, had rejected it. However, this passage is clearly talking about individuals. Not all Jews had rejected the message (as verses 42-43 demonstrate), and not all Gentiles had accepted it.

2) Verse 46 says that the Jews rejected the Gospel, and considered themselves unworthy to receive it, hence this is just speaking about the Gentiles' choice. The problem with this contention is that this verse makes it clear that the act of believing on the part of the Gentiles followed the appointment to eternal life. That is, those who were the ones appointed to eternal life were the ones who believed; if one was not appointed to eternal life, they did not believe. That Jews earlier objected to the Gospel does not contradict Calvinism: that is the natural state of man, which is to reject the Gospel and the message of salvation.

It is also helpful to note that, grammatically speaking, Acts 13:48 is an example of the pluperfect tense. Daniel Wallace lists this verse as one such example of the tense, and writes:


...the force of the pluperfect tense is that it describes an event that, completed in the past, has results that existed in the past as well (in relation to the time of speaking). [pg. 583; Wallace]

On the same page, Mr. Wallace explains further that the pluperfect does not make a comment "about the results existing up to the time of speaking". William D. Mounce likewise writes:

Let us now go to the image, and deal with the supposed treatment of the Calvinist position.

The image states that "God arbitrarily appointed some to eternal life and there is no chance for others to be saved." Immediately, we have a problem with the use of "arbitrary"; as I stated in my podcasts on Matthew Gallatin's use of Romans 9 (he likewise uses the term "arbitary"), that word is misplaced in the Calvinist concept of God. In the Twitter thread where I saw this used, the OP explained: "Arbitrary means 'based on random choice or personal whim'. By definition, arbitrary works just fine." This, however, is problematic, for the simple fact that God does not do anything by "random choice," nor does he do anything by "personal whim." Everything God does is with purpose - even election. This is found throughout scripture, where God will say "for this purpose" and "for this reason" whenever discussion his actions.

The image continues by saying that this belief "makes God a liar," and proceeds to cite 1 Timothy 2:4 and 2 Peter 3:9. These two verses are passages that have been addressed by Calvinists for perhaps hundreds of years, so simply throwing them out in the discussion is (to be frank) highly unproductive, and shows a lack of understanding of the side you are criticizing. For the sake of time, I will link to two discussions on the verses, explaining them from the Calvinist perspective: one on the verse from Paul, and one on the verse from Peter. In short: 1 Timothy 2:4 is speaking about different kinds of men, while 2 Peter 3:9 is addressing believers, not unbelievers (again, see the longer discussions linked to).

The image likewise argues this makes God a "respecter of persons," and cites against such a notion Acts 10:34, Romans 2:11, and 1 Peter 1:17. However, the author of this image seems to fail to recognize two things:

Firstly, Acts 10:34 and Romans 2:11 are referring to ethnicity and race. Acts 10 tells the story of Peter, an ethnic Jew, visiting Cornelius' household, and seeing that the Spirit has been poured out upon the Gentiles; Romans 2:11 is preceded by verse 10, which states "glory and honor and peace to everyone who does good, to the Jew first and also to the Greek." God is not a respecter of persons in regards to their ethnic or racial identity (ie., no one will be banned from salvation simply because they're black, or Latino); this is what those verses are attempting to get across.

Secondly, 1 Peter 1:17 is simply saying that God is one "who impartially judges according to each one’s work." This in no way refutes the idea of unconditional election - it only confirms that God will judge each one rightfully according to their deeds. Calvinist and non-Calvinist alike would agree on this.

The final part of this image's opposition to the (straw man) Calvinist position is that this makes it so God does not "appoint everyone to eternal life," and cites Matthew 7:13. This verse simply states: "Enter through the narrow gate; for the gate is wide and the way is broad that leads to destruction, and there are many who enter through it." This verse in no way states that God has appointed all to eternal life, nor suggests that such a thing is possible.

Let us now go to the right side of the image, and the response to the so-called Calvinist position.

The contention is that these Gentiles were "making an appointment for eternal life." A quick correction here: these were not unbelieving Gentiles, but Jews and God-fearing men (Gentile converts to Judaism who abstained from circumcision), as clarified in verse 43 (the word "Gentile" is not even used in verse 42, but rather simply the pronoun "they"). Let us also not forget that Paul and Barnabas were speaking in the synagogue (v. 14), and verse 42 happens after their long sermon in the synagogue.

However, let's put this aside for now and examine the contention that the the people were "making an appointment for eternal life," and let us remember what we established earlier: which comes first in this verse? The appointing, or the believing? The appointing does. Those who were appointed were those who believed. If there had been no appointing, there would be no believing. If we were to take the sentence, "As many as were drafted served in the army," and then argued that those who served in the army had drafted themselves, it would make no sense. However, this is how some synergists wish to interpret Acts 13:48.

Further confusion is added to the verse when the image states: "they make appointments to hear the truth of the gospel, and faith comes by hearing of the word of God (Rom 1:16; 10:17)." Two points in regards to this:

Firstly, let's again ask who is making the appointment, and what is being appointed. It is people being appointed (not making appointments - note the image's subtle transition from verb to noun), and this appointing is towards eternal life. There is nothing here about individuals "making appointments" to "hear the truth of the gospel" (in fact, they had already heard it in the text, therefore it seems illogical to hear it again in order to believe).

Secondly, the citations of Romans 1:16 and 10:17 are unrelated to this conversation. I know the image maker probably cited them to back up the statement that faith comes by hearing the word of God, but this in no way contradicts Calvinist doctrine. Calvinists believe that God elects people unto salvation, and then calls them unto that salvation through the preaching of His truth, just as Paul writes "and these whom He predestined, He also called" (Rom 8:30a). It is also worth noting that in the famous phrase "many are called, but few are chosen" (Matt 22:14), the Greek word for "chosen" can literally be translated as "the called of the called."

In short, this image does not present a conundrum for Calvinist doctrine. Like many anti-Calvinist arguments, it misrepresents the Calvinist position and attempts to reword the passages in question in order to make it fit with a more synergistic approach. As I've said elsewhere, both on the blog and my podcast, this is one of the reasons I'm a Calvinist: when I was a non-Calvinist and I was reviewing both sides of the argument, I saw that one side was being dishonest about the other's position, and not handling scripture rightly; that side was the synergistic side. When I was as honest with scriptural passages about salvation as I was with scriptural passages about the Trinity or the divinity of Christ, I had to come to Calvinistic conclusions.

However, I invite the reader to examine this passage themselves, and treat it with respect and honesty, and see for themselves what the word of God has to say. God bless.

Wallace, Daniel B. Greek Grammar Beyond the Basics. Grand Rapids: Zondervan, 1996. Print.
Email ThisBlogThis!Share to TwitterShare to FacebookShare to Pinterest
Posted by Tony at 9:40 AM