A Tale of a Feminist Christian

Once upon a time, there was a woman named Jory Micah. She considered herself a social justice warrior, and a feminist. She fought against the evil patriarchy that she believed had infiltrated the church, and fought for the rights of minorities all across America.

This Jory Micah received a lot of flack for things she said. In perfect honesty, it wasn't undeserved. Sometimes she would say things that would make you think, for just a few seconds, that you were looking at an SJW satire account.


She was also quite blatantly contradictory in her logic, to the point of self-satire. One big example is when she at one point said Ivanka Trump couldn't be a feminist because she was wealthy; some time later, Micah blew a gasket because Beyonce - a wealthy musician - didn't receive a Grammy award, and hence feminists should unite to defend her. After all, according to Micah, a "woman of color" had received great "injustice."


Another big example came when she attacked orthodox Christians for using the word "heretic," then later called the Pre-Tribulation Rapture heresy; when confronted on this, she pulled the modern Roman Catholic apologists' approach to the anathemas of Trent and argued that she said a belief was "heresy," but she didn't call any individual a "heretic." (In fact, I saw this coming and predicted it.)

I had her on a Twitter watch list, along with Rachel Held Evans and some other feminist "Christians." However, I rarely paid attention to what she was saying, unless my wife brought it to my attention, or a Twitter follower shared something. It wasn't that I had anything personal against Miss Micah, it's just that...well...nothing she presented was new. As others have rightfully pointed out, everything she argues or pushes for has already been said by feminist heretics of the past. She came across like a young lady who looked at Evans and others in the religious wing of the SJW movement and cried out, "Me too! Me too!" There was really no need to write a response specifically to her, since it had already been said a dozen times towards other people. For the most part, I just left her be, to dwell in the echo chamber that is Social Justice Warrior life.

Jory Micah criticized black Christian musician LeCrae for talking about white privilege while being a complementarian. Then she started to say that, while she supported same-sex marriage, she didn't find it well supported in scripture. That made her SJW and leftist "Christian" friends mad. How dare a white woman criticize anything a black person does! How dare she even suggest that scripture may not be quite so clear about the fact two men can marry! They began to pile on her, critiquing her. They increased in number. According to her own claims, twenty people were going at her at once.

In her mind, she was betrayed. After all, hadn't she been on the forefront of the social justice war? Hadn't she been fighting against those "mean conservatives" (her words) to promote progressive thought within the Christian church? Wasn't she part of the team? Sure, she had a few tiny reservations, but she was still one with the SJW pack, right? Why, then, had things suddenly turned so ugly? 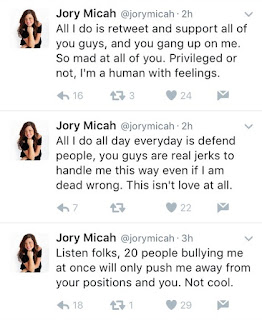 Finally, she declared she was on an internet sabbatical.


What Jory Micah learned, too little too late, is that the worldview she had chosen to embrace is not very kind to those who offer dissenting opinion. Like a rabid school of sharks, they will quickly turn against and devour one of their own when they sense a weakness. With feminism in particular and the Social Justice movement in general, you are either all in with the decline of civilization, or you are just as bad as those "mean conservatives." She had broken the cardinal rule of a society declining in moral standards: "and although they know the ordinance of God, that those who practice such things are worthy of death, they not only do the same, but also give hearty approval to those who practice them" (Ro 1:31). Micah had dared to not give hearty approval to the standards of her people, and so by her people she had been rejected. She had attempted to give even an inkling of holiness to the God-haters, forgetting the warning of Christ: "Do not give what is holy to dogs, and do not throw your pearls before swine, or they will trample them under their feet, and turn and tear you to pieces" (Mt 7:6).

Now, at the risk of sounding like a generic article at The Gospel Coalition, let's ask this important question: how should Christians react to this?

It might be easy to point and laugh, given the irony: Jory Micah, a staunch supporter of SJW ideology, was bullied off social media not by the "mean conservatives" she fought against, but by the very social justice warriors she thought had her back. Certainly there are times in scripture where the church of God lambastes her enemies after they fall (and if you don't agree with me, don't read Isaiah 14). However, we're dealing here with an individual, not a collective group. At the moment, she's probably feeling a lot of pain and betrayal. I know from personal experience how it can be when a group of people you thought was on your side suddenly turns against you. (I had a bit of that experience when I left Eastern Orthodoxy.)

We must also remember that this is an individual who will, at the end of her life, when she comes before her King, have to account for her sins just like you and me. She will be held accountable for what she did with God's word, how she treated God's church, and what she taught others as the teachings of God - just like you and me.

I've prayed that she repents. I really hope she does. I hope she takes this time with Jesus she claims to be having, and the Holy Spirit works in her heart to make her realize that she was permitting the influence of progressive heresy to prey on her personal emotions and teach error. I hope, if she resurfaces again, that she does so in a spirit of repentance, disassociating herself with what she used to be. Think what an amazing testimony it would be, that someone infamous for her Twitter rants about how great it is to be a precious snowflake now speaks against feminism, SJW thought, and left-wing heresy. It would be a great show of God's grace, and how he can turn a sinner's heart from stone into flesh.

We should be praying that Jory Micah receives regeneration and comes into the fold, after which we can gladly welcome her in. We can do this knowing that when the end comes, she will drop the knee to Christ, not because she had to be forced to since such an act would be perpetuating patriarchy, but because she loves her Lord and His word. Soli Deo Gloria.

UPDATE, SHORTLY AFTER I WROTE THIS POST - Well, that private time with Jesus didn't last long...

UPDATE, MARCH 16, 2017 - Jory is back, and is attempting to repent. Not before God or the church, of course. What I mean is she came back to repent before her fellow SJWs.


When I first saw this, the first temptation was to laugh. I couldn't, however, because it just came across as so depressing. This was like a Jehovah's Witness who had been kicked out of the Kingdom Hall and was desperately trying to reunite with friends and family. Jory Micah really truly does not want to be separated from her feminism and "social justice." It clearly pains her to the point of confessing that she was in the wrong, when any sane person would be able to see that she hadn't done anything wrong. (Not that I agreed with her criticism of LeCrae, or her support of same-sex marriage, mind you, but her questioning someone's consistency or whether or not something is strongly taught in scripture shouldn't have been enough to ostracize her.)

It's clear from this that feminism is a cult, as is the mindset of a Social Justice Warrior. Sadly, this makes it clear that Jory Micah is far more worried about being kicked out of the feminist camp than she is the church of God. She still really, truly needs our prayers.

UPDATE, MARCH 20, 2017 - I want to include a link to the blog post entitled An Open Letter to Jory Micah, from the Reform Like a Woman blog. It puts things way more graciously than I could ever hope to do.
Email ThisBlogThis!Share to TwitterShare to FacebookShare to Pinterest
Posted by Tony at 6:00 AM