The Gospel of Hellraiser 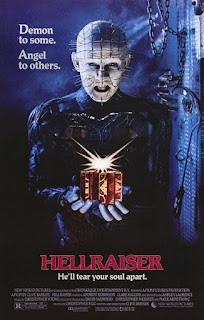 Hellraiser is a 1987 horror film written and directed by Clive Barker, based off his novella The Hellbound Heart. It stars Andrew Robinson (who played the Scorpio Killer in Dirty Harry and Garak in Star Trek: Deep Space Nine). Since its initial release, Hellraiser has spawned a meager nine sequels, with the latest one set to come out this year. Like many horror films, Hellraiser explores the themes of evil, wickedness, and sin. Unlike most films in our degenerate culture, however, it's exploring these themes in surprisingly Christian ways.

From the very opening of the film, a Christian worldview is in sight. Frank Cotton is seen in a nameless Oriental market, speaking with an elderly Asian man. "What's your pleasure, Mr. Cotton?" the man asks. And so, with the very first words of the movie, we see what is driving the plotline: a reliance by man upon his fleshly desires. As the prophet Jeremiah warned, the human heart is "more deceitful than all else and is desperately sick; who can understand it?" (Jer 17:9) How sick is it? We see this in the next scene, where Frank, in a strange ritual, unlocks the puzzle box... and is promptly attacked by hooks that dig into his flesh. Yet this sort of pain is what Frank wants. Frank is a character driven by sexual perversion. He never heeded the words of the apostle Paul to "make no provision for the flesh in regard to its lusts" (Rom 13:14), nor the words of the apostle Peter to "abstain from fleshly lusts which wage war against the soul" (1 Pet 2:11). When he speaks later of what motivated him to get the box, he explains: "It opens doors... Doors to the pleasures of heaven or hell - I didn't care which." In his seek for the pleasures of the flesh, he'd believed he'd gone to the limits, but knew there was more. As it happened, the Cenobites - demons who engage in sado-masochism - gave him something beyond limits. "Pain and pleasure indivisible." The Cenobites themselves are, as described by the Lead Cenobite (later nicknamed "Pinhead" by fans), considered "demons to some, angels to others." To Frank, and those of his similar mindset, what he's doing is perfectly right, because it satisfied him, even if what he's doing is revolting to conscious. His perversion is normality, and the Cenobites, though they desire the destruction of his soul, are heavenly angels. "All the ways of a man are clean in his own sight, but the Lord weighs the motives." (Pro 16:2)

After Frank's initial capture by the Cenobites, the film cuts to some time later (just as John often wrote "after these things"; John 5:1), and Larry, Frank's brother, moves into Frank's house with his second wife Julia. (Larry presumes his brother has gotten himself in a prison somewhere.) The Cotton family life is anything but stable: Larry's daughter Kirsty is growing more and more estranged, and Larry is trying to take away the tension between him and Julia, who does not have a servant's heart. For example, when they're moving in, one of the movers asks, "You got any beer?" Julia simply says, "There's some in the fridge." After an awkward moment of silence, Larry is forced to go get it himself, saying sarcastically, "I've got nothing better to do." Later on, it is revealed that, before Larry and Julia married, Julia and Frank started an adulterous relationship. When they move into the house, Julia finds old photos of Frank (including the more perverse ones) and keeps them for herself, fantasizing about their past relationship. Hence Julia is far from a Proverbs 31 woman, and it could not be said of her: "The heart of her husband trusts in her, and he will have no lack of gain. She does him good and not evil all the days of her life" (Pro 31:11-12). When she encounters the resurrected Frank, she at once recommits to their adultery, and even engages in murder to assist his return to normal. At first, she's repulsed by her own acts, but over time she grows immune, and even learns to love it, to the point that things which used to offend her (eg., boxing) no longer have any effect.

These murders in and of themselves are worth pondering over. Julia goes to bars and picks up men, bringing them back to her house where she beats them with a hammer. She is like the harlot seen by Solomon; in fact, in one scene Kirsty sees Julia take one of the men to her house, and so fulfills the words of scripture: "I saw among the naive, and discerned among the youths a young man lacking sense, passing through the street near her corner; and he takes the way to her house" (Pro 7:7-8). Julia, by her slaying, fulfills the warning of Solomon regarding the adulteress: "Many are the victims she has cast down, and numerous are all her slain. Her house is the way to Sheol, descending to the chambers of death" (Pro 7:26-27).

You may have noticed I said earlier "the resurrected Frank." Yes indeed, resurrection carries a theme in this movie. While moving a bed upstairs, Larry cuts himself on an old nail, and drips blood into the floor of the attic. This blood seeps under the floor, where Frank's still beating heart lurks. This sets off a chain reaction in which Frank's body is quite literally resurrected from the ground. It's a long sequence, in which his skull, his bones, his muscles - everything - are reconstructed. Fingers regrow, organs are planted into him. It is a resurrection in every sense of the word - in fact, the musical track for the scene is known as "Resurrection." Yet this resurrection is incomplete: when it finishes, he is more like a dried corpse than a human being. Julia must kill and let him take the blood from the victims in order to become whole again. In this sense, just as the Cenobites are distortions of angels, so is this a distortion of true spiritual resurrection. "Behold, I am making all things new," Christ promised (Rev 21:5). Evil, however, cannot make anything truly new. It is always coming up short of God's glory and perfection. Hence, similarly, a sinful, evil resurrection can only make a dead body animated - it cannot make it truly alive.

The end of the film has the most infamous scene in the movie. Frank has killed Larry, and is now wearing his skin to be "complete." Evil cannot exist by itself - it must be a distortion of good. Kirsty, however, has tricked Frank into confessing what he did with the Cenobites nearby. ("You have been snared with the words of your mouth, have been caught with the words of your mouth"; Pro 6:2.) The Cenobites appear, and begin to capture Frank by latching hooks through every part of his flesh, to the point of stretching out his face. In the midst of this great agony and pain, Frank suddenly looks at Kirsty with a smile, licks his lips, and declares, "Jesus wept." He chuckles before the Cenobites literally tear him apart. The line is obviously a reference to John 11:35, the shortest line in all of scripture. In the DVD commentary for the film, Clive Barker explains that the script had originally said "F--- you," but Andrew Robinson improvised the line which made it into the scene. There is much speculation about what drove Robinson to choose that line, or how it relates to the film as a whole, but I think one theory perhaps sums it up best: while Jesus wept over the suffering of mankind, and his own suffering later on the cross, Frank embraces it. He wants it. He loves it. Despite his attempts to gain freedom into our world again, this was what we truly desired all along. The Cenobites can torture him all he wants, because it's the torture that makes him happy. Jesus wept; Frank laughs.

In many ways, Frank's death scene is an anti-Passion. Consider this.
Lest we think the Cenobites have some good in them for killing Frank and hence avenging Larry, we must remember that, at the end, the Cenobites turn against Kirsty, and it is up to her to defeat them. Such a situation is seen in scripture: "I will put enmity between you and the woman" God said to the devil (Gen 3:15). At the very end of the film, a demon takes the box and flies into the sky, and it is next seen with the elderly Asian man again, who repeats his question from the beginning to a brand new customer: "What's your pleasure, sir?" Hence the cycle of sin is prepared to start again. "There is no remembrance of earlier things; and also of the later things which will occur," Solomon lamented, "there will be for them no remembrance among those who will come later still" (Ecc 1:11). Frank was not an anomaly, for it can be said of all men who lived that "every intent of the thoughts of his heart was only evil continually" (Gen 6:5).

One final, but very important thing to note, is the side comment made by the Asian seller at the very beginning. When Frank says he wants to purchase the box, he says, "Take it, its yours." After Frank nabs it and leaves, the man mutters, "It always was." Here we see a level of predestination and fate. "The Lord has made everything for its own purpose," Solomon writes, "even the wicked for the day of evil" (Pro 16:4). Frank has been marked out. He has been designated for his role in the story. He is like Judas, the "son of perdition" who would betray Christ so that "the Scripture would be fulfilled" (John 17:12). Frank's purpose, however, is to permit his own willful self-destruction. In this sense, therefore, the film is a surprisingly Calvinistic one. "What if God," the apostle Paul asked, "although willing to demonstrate His wrath and to make His power known, endured with much patience vessels of wrath prepared for destruction?" (Rom 9:22) Hence, through the Cenobites, God enacts the punishment upon Frank which had been prepared for him. In this sense, Clive Barker's original novella was right: Frank's heart truly was a "hellbound" one.

This brings us to our concluding thoughts on Hellraiser. Unlike many horror films, which emphasize sin and vice for nothing more than lots of sex and gore, Hellraiser is communicating to its audience with truly Christian ideas. While the puzzle box in the movie might open doorways "of heaven or hell," Christians can surely use Hellraiser's puzzle box of a story as an opportunity to discuss what sin truly is, and how destructive a force it can be in our lives.This is an opportunity I beseech we take advantage of with full throttle.
Email ThisBlogThis!Share to TwitterShare to FacebookShare to Pinterest
Posted by Tony at 6:00 AM