Of Cats and Providence 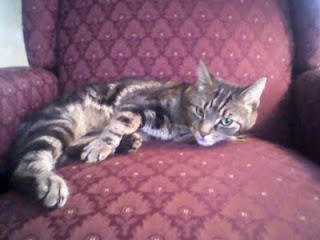 Early last week, I received word from family members that Kitty, the family cat, had died. Those who have read my blog posts already know Kitty, as I used him as a subject to make LOLcat-style images here and over at the Sola Saturated blog here. Some might also remember that in a post on my old blog - done in memory of the family Saint Bernard, Winston - I described how Kitty looked out for Winston in his last days.

These past few weeks have seen me experience some severe disappointments, and Kitty's death was the worst of them all. Even though he was approaching 12 years of age, he still seemed as strong and chipper as ever. He seemed so invincible: he fought off foxes, chased raccoons up trees, hunted down chipmunks, and got the two dogs that lived in our house to do whatever he bid them to do. What's more, he was always one of the family, and though he often put on a tough guy persona, he was still a sweetheart. He enjoyed company, and if you started talking to him, he would begin to purr. I still remember one time stumbling on the stairs and hurting my foot; suddenly I heard a "mwrr" sound and saw Kitty running around the corner, as if to make sure I was OK.

In truth, though, there was a time before when I almost thought we had lost him. Some years ago Kitty went missing for fourteen days, but came back safe and sound, if not seemingly hurt and malnourished. He quickly healed up and continued living with us for many more years. During those fourteen days, I had prayed that God would bring him back, and spare him, and I had prayed it during these last few weeks of Kitty's life. However, it was not to be. This time, God would take Kitty from us. As it was with Winston, it would be Kitty's time to go.

Yet God gave Kitty to us as much as He took him from us. We got Kitty from a litter of strays when he was as tiny as the palm of your hand and still very much a baby kitten. He provided us over a decade of happiness and provided Winston with a furry companion during our many moves and life experiences. He was a gift, but when we recognize that God giveth, we have to likewise acknowledge that He taketh away (cf. Job 1:20).

It's easy for us to attribute the good in life to God and ignore the bad. When a person hears Joseph say to his brothers "you meant evil against me, but God meant it for good" (Gen 50:20), everyone leaps and embraces the "God meant it for good" part. No one wants to tackle the "you meant evil" part, because in doing so they have to recognize that the brothers' plot to sell Joseph into slavery, kill an animal, bathe Joseph's coat in its blood, and then lie to their father, causing years of grief and misery for an old man...that all of that happened by God's ordained purpose. When Joseph says God meant it for good, the it is in reference to all the evil his brothers committed against him and their father.

It's likewise easy for us to think of the crucifixion, think about how noble it was, and how grand the resurrection was for God and the church, and forget the words of Acts 4:27-28: "For truly in this city there were gathered together against Your holy servant Jesus, whom You anointed, both Herod and Pontius Pilate, along with the Gentiles and the peoples of Israel, to do whatever Your hand and Your purpose predestined to occur." All that happened during the passion of our Lord, God had predestined to occur. This means that God personally arranged it, set it up, and controlled it through to the end. There was no chance for, at zero hour, Pilate to say, "Forget it, release him." There was no chance for angels to sweep in and rescue Jesus a la a kind of divine Entebbe raid. All that was to occur...the betrayal of a disciple, the rejection of the Messiah by His fellow Jews, the abuse of the Messiah at the hand of foreign soldiers, the horrifying and embarrassing execution, the sight of all this before family and friends...was predestined by God to occur. Yet it was all done by His providence for the good of His people.

When Paul writes "And we know that God causes all things to work together for good to those who love God" (Rom 8:28), we forget that "all things" doesn't just mean the good. However, we often expect only good from God, and forget that oftentimes we are disciplined and chastised for our benefit (cf. Rev 3:19). We expect the "work together for good" to come before the "all things," but forget that this is not how the apostle ordered the events in his epistle.

Some might wonder if such tragedies lead me towards the temptation of atheism. The truth is, while the temptation has come and gone, it has never set foot. I credit this not to any intellectual skill or personal effort, but entirely on the grace of our Lord. God has planted within me a knowledge that He does exist, and if I know there is a Divine Being, I must reason with evil and divine responsibility as C.S. Lewis and many before him did. When dealing with tragedy, pain and God's responsibility, I often lead people through this dilemma:

The reason, of course, that "good" it was meant for that Joseph spoke about, may not become apparent - it didn't become apparent for Joseph until several years later. It may not be until decades that I learn what good comes from this, but I do believe that God permits all things for good. I am not an open theist, I do not believe in process theology and I am not a hyper-synergist who believes God only intercedes in the affairs of man when it might be a decent time to do so. I believe all things serve a purpose, and I believe God knows all events and is sovereign over all. Most of all, I know that in the end, no matter what happens, I will be like the wise thief on the cross: a justified sinner in paradise with our Lord, who was crucified for me that I might be there to glorify the bounteous nature of His grace.

Soli Deo Gloria.
Email ThisBlogThis!Share to TwitterShare to FacebookShare to Pinterest
Posted by Tony at 11:00 AM