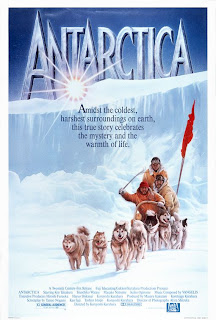 Several months ago, I watched the Japanese film Nankyoku Monogatari, more well known in the west as Antarctica. The film tells the true story of the 1958 Japanese expedition to Antarctica, which ended abruptly due to horrible weather. With the situation getting worse and worse, the crew was eventually forced to abandon Showa Base, and evacuate everyone on the last available ship. The personnel included two dog handlers, who led a team of fifteen karafuto dogs. The handlers left the dogs behind with the understanding that a second team was coming to pick them up. Soon, however, they received terrible news: the weather was delaying the second team, and the ship was running out of supplies...they would have to leave the dogs behind. The sled team was thus left in the face of an oncoming blizzard, chained up and outside in the harsh cold.

Eleven months went by before another expedition was called to return to Showa Base, and the two dog handlers went along to collect what they thought would be the bodies of all the dogs. Seven of the dogs were sadly found dead, still tied to their chains. Eight dogs had managed to break free, but six had gone missing in the wilderness. Yet to the amazement of all present, two of the dogs - Taro and Jiro - were found alive and well! Jiro would go on to participate in another expedition, dying in 1960, while Taro continued to live until he passed away at the age of 15 in 1970. To this day there is a memorial to all fifteen dogs in Tokyo.


It is a great movie, but at the same time definitely not an easy one to watch - especially if you're a dog lover. Although I already knew the historical back story and was already aware which dogs would live, that didn't make the death scenes of the other six any less painful. At the end, where the two dogs go running happily to the dog handlers, the two groups embracing one another in the snow, you can't help but cry tears of joy. Even now, several months after seeing the film, I can't listen to the excellent theme by Vangelis without thinking of that scene and choking up.

No one knows exactly how Taro and Jiro managed to survive, or what precisely happened to the other six dogs. The film takes much liberty in explaining this gap, but captures well the hazards and cruel settings of Antarctica. The glaciers shift, wild animals attack, and the entire continent is covered in darkness for almost six months - for all intents and purposes, none of the dogs should have survived. They should have all been dead. A stray dog might be able to survive a harsh winter in a city where food and possible support are plentiful, but Antarctica has a winter unlike any known elsewhere, and food (if not life itself) can become immensely scarce. If anything, the six months during which Antarctica is covered in darkness should have been enough to bring about an end to all the dogs. Instead, for whatever reason, Taro and Jiro managed to survive long enough before they were rescued.

Let me pause to preemptively answer the question: do I believe in "doggy heaven"? Yes and no. I don't believe in a heaven for animals like you see in movies such as All Dogs Go to Heaven, nor do I believe in apocryphal ideas like "the rainbow bridge"; I do, however, believe that animals will have a part to play in the resurrection and God's renewed creation. I don't go any further on this than scripture explains, regardless of the emotional tugs at my heart which may demand I fill in the gaps. All the same, I enjoy the teaching of many Church Fathers that animals are an earthly sign of God's attributes. Animals are certainly used throughout scripture either as instruments of judgment (2 Ki 17:24-25), or as symbols of ideas such as faithful loyalty (Isa 1:3) or providential support (Luke 12:24).

If this notion is the case, then the story of Taro and Jiro is one amazing symbol of God's providence. Of all the dogs, these two brothers were not only given the power to break free from their chains, but were given just enough guidance, food and strength to survive the harshest and most unforgiving region in the world for eleven months. God could have willed that all fifteen would be found chained up and dead, but, according to His will and purpose, He saved two.

In short, I'm not amazed that most of the dogs didn't survive Antarctica...I'm amazed any survived.
Email ThisBlogThis!Share to TwitterShare to FacebookShare to Pinterest
Posted by Tony at 10:00 AM