Why the Stone was Rolled Back

And behold, there was a great earthquake, for an angel of the Lord descended from heaven and came and rolled back the stone and sat on it. [Matthew 28:2] 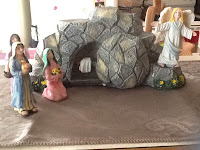 Perhaps a question not many ask themselves, when coming across this verse, is: why did an angel roll the stone back? Consider, for a moment, shortly after the resurrection, that when the disciples were gathered together in a closed room, Christ appeared to them without a problem (Jn 20:26). Why didn't he do the same with the stone? Why was it necessary for an angel to come down and roll the stone back?

Perhaps a few explanations could be considered as to exactly why:

Firstly, the stone was rolled back so that the women, approaching that morning (Mt 28:1; Mk 16:1-2; Lk 24:1; Jn 20:1), might see that Christ was gone, and could be told by the angels to go tell the apostles that the resurrection had occurred.

Secondly, the stone was rolled back to demonstrate the sovereignty of God over the sovereignty of man. The Roman soldiers positioned at the tomb had placed a seal on the stone (Mt 27:66), which served a two-fold function: 1) if the stone was moved back, the seal would be broken, and be prove of wrongdoing if the stone was moved back in place; 2) it was a way of telling potential thieves "Property of the Roman Empire - Keep Out." By the angel coming down and rolling the stone aside, he not only challenged the authority of the seal (as well as the nearby guard), but showed that no power of man on earth is able to stop the will of God.

Thirdly, the stone represented the ultimate separation between those who have passed on and those are still living. Death separated man from God, but in Jesus are men granted eternal life, as the apostle Paul wrote: "for the wages of sin is death, but the free gift of God is eternal life in Christ Jesus our Lord" (Rom 6:23). With the rolling back of the stone, the end of that separation was realized, and Christ's resurrection gave hope for those struggling with the pains of death, seeking eternal life.

Fourthly and finally, the rolling back of the stone signified that Christ had been acquitted of all charges laid against him, and was now free to go. For those who killed him, he was guilty of two crimes: from the Jews, blasphemy (Mt 26:65-66); from the Romans, treachery (Lk 23:2). However, for the purposes of God, he was convicted of greater crimes...namely, the crimes of all those who would believe in his name. The apostle Paul wrote that it was "for our sake he made him to be sin who knew no sin" (2 Co 5:21), and the prophet Isaiah had foretold that the suffering servant would be "pierced for our transgressions" and "crushed for our iniquities," and that the LORD would lay on him "the iniquity of us all" (Isa 53:5-6).

This final point has greater significance, for in being let out and declared free of all charge against sin, God's sheep likewise were cleared of all charges. Christ paid the ultimate price for the sins of his people, and our guilt he took on. Every sin we ever committed, are committing, and would commit, was paid for on the cross, and we were declared innocent in Christ the minute that stone was rolled aside. As we ponder and meditate on Resurrection Sunday, and think of what it means when Christ walked out of that tomb, let us remember that he was the Good Shepherd, and those who did follow, are following, and shall follow him out of that tomb are his sheep.

If you are reading this, and you are outside of Christ, then the Resurrection still has relevance for you. There will come a day when God will judge you for every sin you committed: every lie you told, every curse against your fellow man, every lustful thought, everything you stole, and on and on. For those outside of Christ, the wrath of God abides (cf. Jn 3:36), and their guilt remains. If you have not considered eternity, my friend, then let me exhort you to consider eternity, for when the time comes, there will be no opportunity for second thoughts or pondering - that will be it. Consider seriously, then, the situation you are in, and look to the open tomb of Christ. It shows to you that the resurrection was a reality, and that there will come a time when Christ shall resurrect the dead and bring forth the living for a reckoning. What will you say when all your sins are laid before you?

There is, however, the gift of eternal life available for you. Those who repent and believe and lean upon Christ for salvation shall find a Savior who "is able also to save forever those who draw near to God through Him" (Heb 7:25). In Christ all your sins shall be atoned, and before God you shall be declared innocent. You shall have peace in the knowledge that you are in Christ, from which no one can snatch you (Jn 10:29). You will be declared as innocent as Christ when he went forth from the tomb, and you shall join him in the company of saints on the day of resurrection. Consider these holy things seriously, for these are serious things to consider. You are being called to repent, and the chance is now for you to see the gravity of your sins and the love of Christ in those who believe.

God bless.
Email ThisBlogThis!Share to TwitterShare to FacebookShare to Pinterest
Posted by Tony at 10:00 AM