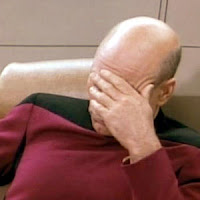 Well kids, we've been graced yet again by face palming Picard, which means it must be time again for another silly argument. 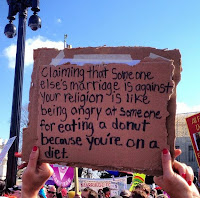 I saw the image on the left shared on social media. It's a sign held up that reads: "Claiming that someone else's marriage is against your religion is like being angry at someone for eating a donut because you're on a diet." I thought I would provide a brief response to it.

Firstly, the analogy here makes no sense. A person is on a diet to abstain from food - they would only be angry at the doughnut eater because they might desire the doughnut themselves. By contrast, people opposed to same sex marriage are not desiring it (let alone homosexual fornication) for themselves. The reason one might oppose homosexuality based on religious beliefs is not because of personal preference or abstinence, but because it contradicts divine truths. Comparing it to a doughnut being eaten while someone's on a diet is truly comparing apples with oranges.

Secondly, no one's "angry." Well OK, the Westboro cult, maybe, but they're special any way.

Thirdly, some might contend that the picture is trying to say, "Religious people are against same sex marriage because they think it's wrong, same as those who follow a diet think eating a doughnut is wrong." Even with this understanding, however, the analogy completely fails, because even those on a diet might recognize a doughnut as a legitimate food to eat (even if unhealthy), whereas a person who upholds belief in a Divine Creator, who has designed the natural order, are opposed to same sex marriage on the grounds that it is completely contradictory to said natural order. A closer analogy would be a person on a diet advising another person not to eat a rubber tire.

Truth be told, and being perfectly blunt, this is a really, really, really, really, really, reeeeeeally bad argument. I saw this being shared and people saying "Wow, that's awesome!" in response, and couldn't help but think...really, people? And some of these people were individuals who claimed to be Christians - do they truly not understand the difference between being on a diet and believing in a just, holy, righteous God?

We seriously need to pray for them.
Email ThisBlogThis!Share to TwitterShare to FacebookShare to Pinterest
Posted by Tony at 11:27 AM