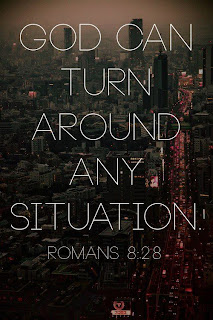 I came across another one of these images on a social media site which shall remain nameless. It cites Romans 8:28 and reads: "God can turn around any situation." I just did some cross referencing in the Bible, and realized that, once again, we had an example of therapeutic theology robbing a verse of its context and reading into some feel good mentality that distracts people from the true meaning.

First, let's look at the original wording of the verse:


And we know that for those who love God all things work together for good, for those who are called according to his purpose. [Romans 8:28]


For I consider that the sufferings of this present time are not worth comparing with the glory that is to be revealed to us. For the creation waits with eager longing for the revealing of the sons of God. For the creation was subjected to futility, not willingly, but because of him who subjected it, in hope that the creation itself will be set free from its bondage to corruption and obtain the freedom of the glory of the children of God. For we know that the whole creation has been groaning together in the pains of childbirth until now. And not only the creation, but we ourselves, who have the firstfruits of the Spirit, groan inwardly as we wait eagerly for adoption as sons, the redemption of our bodies. For in this hope we were saved. Now hope that is seen is not hope. For who hopes for what he sees? But if we hope for what we do not see, we wait for it with patience. Likewise the Spirit helps us in our weakness. For we do not know what to pray for as we ought, but the Spirit himself intercedes for us with groanings too deep for words. And he who searches hearts knows what is the mind of the Spirit, because the Spirit intercedes for the saints according to the will of God. And we know that for those who love God all things work together for good, for those who are called according to his purpose. For those whom he foreknew he also predestined to be conformed to the image of his Son, in order that he might be the firstborn among many brothers. And those whom he predestined he also called, and those whom he called he also justified, and those whom he justified he also glorified. [Romans 8:18-30]

What is this talking about? Is this talking about God taking your flat tire on the highway and making your day all brighter? Is it saying that it doesn't matter if they put toppings on your hamburger (when you clearly said not to put any on there) since God will make you smile later on? Is it saying that it doesn't matter if someone's texting and talking while you're trying to watch Les Miserables, because God will help you enjoy the movie nonetheless? Actually, no. In fact, starting in verse 18, Paul even confesses that there are sufferings, but that it doesn't matter compared to the glory revealed to us (that is, salvation). He then talks of how the Spirit assists us during these sufferings, and then says: "And we know that for those who love God all things work together for good, for those who are called according to his purpose." Does this mean, however, God can make our day better? Actually no, given the following verse, which is the famous golden chain of redemption. This means that God makes all spiritual things work out for good, because no matter how bad our sufferings might be. It is saying that regardless of what a Christian encounters that will cause him to feel despair and a loss of hope, that we can find joy and peace in the knowledge that we are in the hands of a God who will never let us go, and who will see us through to the end.

As I said in the previous post, this sort of thing does nothing but sacrifice the true meaning of God's word in exchange for emotionalism and "feel good" theology. Yes, I'm sure this image brightened the day for some people...but at what cost? And what does it ultimately teach them in regards to the treatment of God's word?
Email ThisBlogThis!Share to TwitterShare to FacebookShare to Pinterest
Posted by Tony at 10:00 AM