Why St. Francis Got It Wrong 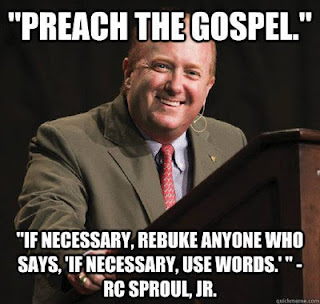 I came across the meme on the left on Facebook a while ago, which showcases RC Sproul, Jr with the quote, "Preach the gospel. If necessary, rebuke anyone who says, 'if necessary, use words.'" It's a play off the famous quote from St. Francis, which goes, "Preach the gospel,  and if necessary, use words." It reminded me of how much, to be blunt, I hated this quote, and the way people use it so casually. Therefore, I decided to write a brief response to it, and why it's wrong.

Author's Note: I recognize that many contend St. Francis never said those words, or at the very least they criticize the historicity of attributing it to him. My reference to St. Francis is related to the popular connection of the quote to him, as most assume he said these words.

The first problem is that it leads either into works righteousness or man-centered theology. The Gospel is meant to be centered around God and what God did, but instead it shifts the focus on man and what man is doing. Some might contend here, "But we're simply showing people the change brought about by God in our life." Again, the focus is on you, and the change wrought in you.

Let's take a moment to say that we are not arguing antinomianism here or easy believism - change should be wrought in you as a result of God's work, and is one of the signs that God's regenerating grace has indeed been worked in you. We should be fine examples to others of how believers should act. The problem is that your lifestyle isn't the gospel. What is the gospel?


Now I would remind you, brothers, of the gospel I preached to you, which you received, in which you stand, and by which you are being saved, if you hold fast to the word I preached to you—unless you believed in vain. For I delivered to you as of first importance what I also received: that Christ died for our sins in accordance with the Scriptures, that he was buried, that he was raised on the third day in accordance with the Scriptures, and that he appeared to Cephas, then to the twelve. [1 Corinthians 15:1-5]

What is the Gospel? It's the death of Christ - for our sins - his burial and resurrection. This is something Christ lived, not you. Which brings us to our next point:

The second problem is that the Gospel is not a lifestyle, it is a message, and you can't live a message. Let me put it this way: when the news regarding the surrender of Germany in World War II was released to the world, would it have made any sense to say, "Spread the news of V-E Day, and if necessary use words." No, it would make no sense. No one would ever be able to realize that Germany had surrendered if you never opened up your mouth and told them. The Allied soldiers who fought against Germany lived the V-E life for you, now you must spread the message. Similarly, no one would ever be able to realize that Christ died, once for all time for the atonement of sins for those who repent and believe in him so that they may rise up on the last day, unless you told them.

The third problem is that, when all is said and done, this teaching is just unbiblical. The apostle Paul wrote:

As we said before, Christ performed the Gospel for you; it's your mission, as an ambassador for Christ (2 Co 5:20), to spread the news of the Gospel to others. An ambassador to a foreign land doesn't get his home country's message across simply by living a different lifestyle, but rather by giving the message supplied by his leader. Your leader is Christ; his message is the Gospel; preach it!
Email ThisBlogThis!Share to TwitterShare to FacebookShare to Pinterest
Posted by Tony at 10:00 AM